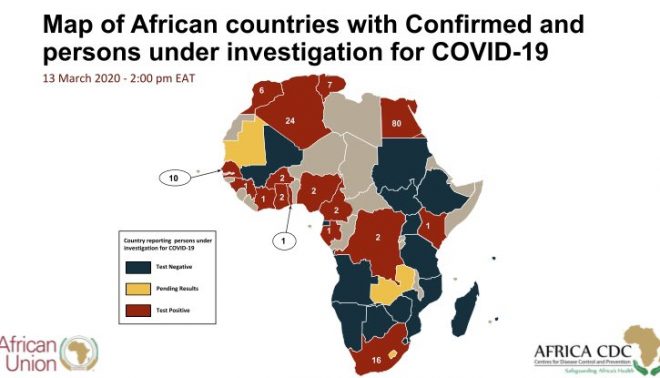 There are now at least 159 positive cases of the novel coronavirus on the African continent, according to health officials, with the first confirmed cases in Ethiopia and Kenya among them.

The Ethiopian case involves a 48-year-old Japanese citizen who traveled from Burkina Faso on March 4 but is isolated by Ethiopia’s public health system, according to Lia Tadesse, the country’s health minister.

“Since fear and panic are as dangerous as the disease itself, this first positive case in the country should not let us lower our guard but should propel us to redouble our effort to control the disease,” she added.

Kenya’s case was confirmed in Nairobi, where a woman tested positive after returning from the United States via London on March 5, the Ministry of Health said.

The Africa Centres for Disease Control and Prevention said the cases are among those in 16 countries, as of Friday. They now include Ghana, Guinea, Gabon, with Sudan adding a fatality later in the day, making 17 in total.

Sudan’s case involves a man in his 50s who returned from the United Arab Emirates last week and died on Thursday in Khartoum.

“The COVID pandemic is spreading quickly and caution must be taken. We urge all citizens to take the right precautions given by the Ministry of Health and the WHO to protect themselves and their families,” said Prime Minister Abdalla Hamdok in a statement.

Dr. Tedros Adhanom Ghebreyesus, head of the World Health Organization, said Friday that the world has passed the milestone of 5,000 fatalities, with more than 132,000 cases in 132 countries.

“This is a new virus and a new situation. We’re all learning, and we must all find new ways to prevent infections, save lives, and minimize impact,” he said. “All countries have lessons to share.”