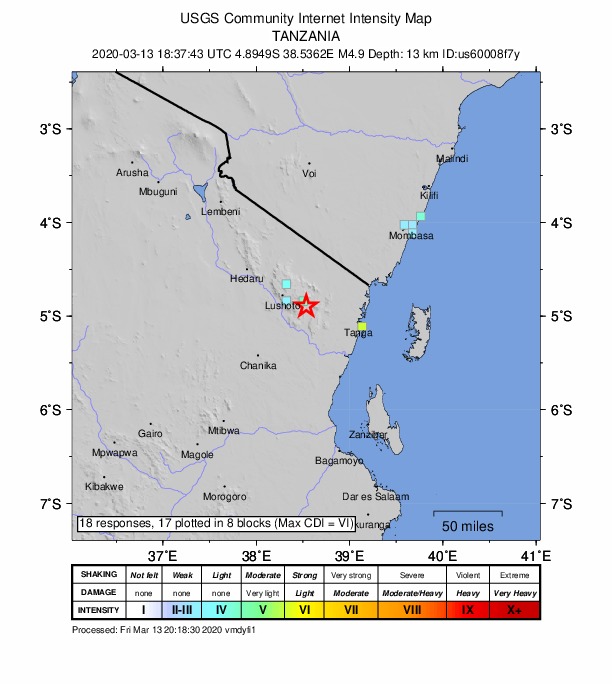 People in parts of Tanzania and neighboring Kenya experienced a light earthquake late Friday in a border region near the Indian Ocean coast.

The magnitude-4.9 earthquake struck at 9:37 p.m. local time, about 19 kilometers from the mountain village of Maramba, according to the United States Geological Survey (USGS). The region is about 65 kilometers from the coastal city of Tanga, a busy port town that’s home to about a quarter-million people.

There were no immediate reports of damage or injuries, though the shaking was felt widely in the region. People from nearby Soni and Lushoto said they felt light to moderate shaking, while at least 11 people from the Mombasa coastal area reported to USGS that they also experienced light tremors.

Moderate earthquakes are not uncommon in Tanzania and neighboring nations along the seismically active East African Rift, with some causing fatalities in recent years. That was the case in March 2019, when a 5.5-magnitude quake caused buildings to collapse in villages of the Mbeyi region. That quake, which was also felt in Malawi, Rwanda and parts of Uganda, caused at least one death.

Another earthquake in September 2016 left at least 20 people when it struck near the Tanzania-Uganda border near Lake Victoria. Bukoba, the regional Tanzanian capital, was hardest hit with damage to some 800 buildings, though the quake also was felt in parts of Burundi, Kenya and Rwanda as well as Uganda.