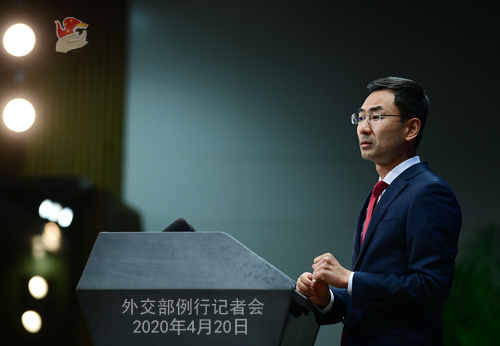 The Chinese government had strong words for the United States after another round of accusations about the coronavirus pandemic, which originated in the Chinese city of Wuhan in late 2019.

Spokesman Geng Shuang, speaking at a Ministry of Foreign Affairs briefing on Monday, said the U.S. needs to understand that the virus that causes COVID-19 disease is the enemy and not the Chinese government itself. His remarks followed a call from U.S. President Donald Trump to investigate China’s role in the crisis, and a legislative effort to determine if U.S. governments can sue Beijing for misleading the World Health Organization and failing to be transparent about the outbreak.

“Did anyone ask the U.S, to offer compensations for the 2009 H1N1 flu, which was first diagnosed before breaking out on a large scale in the U.S. and then spread to 214 countries and regions, killing nearly 200,000 people?” asked Geng in his counterargument.

“AIDS was first reported in the U.S. in the 1980s and then swept across the world, causing untold sufferings to countless victims. Did anyone come forward and ask the U.S. to be held accountable?”

He also said that Kishore Mahbubani, a professor at the National University of Singapore, noted that U.S. financial turmoil in 2008 turned into a global financial crisis. “Did anyone ask the U.S. to take the consequences?” Geng said.

The U.S., Australia and some European countries are questioning how China is implicated in the global pandemic. The ministry spokesman also dismissed another round of claims that the virus escaped from a government lab in Wuhan, and insisted that China is not a scapegoat for the COVID crisis.

“Any doubt about China’s transparency is not only inconsistent with the facts, but also disrespectful of the tremendous efforts and sacrifices of the Chinese people,” Geng said.