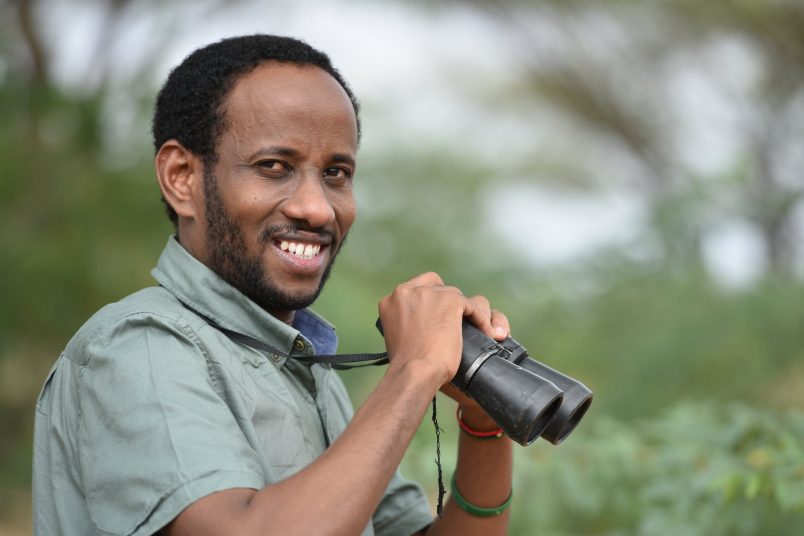 Conservationists from Kenya, Nigeria and South Africa are among the recipients of this year’s prestigious Whitley Awards, announced Tuesday by the United Kingdom-based sponsor organization.

Abdullahi Hussein Ali, above, is the founder of Kenya’s Hirola Conservation Programme, and works with pastoralists and local communities to protect the critically endangered antelope. Fewer than 500 individual hirola live near the border with Somalia and outside of formal wildlife protection areas.

Ali developed a landscape approach to restore habitat with a long-term goal of reestablishing the 500 square kilometer Arawale National Reserve. His program also educates neighbors about the species and its protection.

In Nigeria, Rachel Ashegbofe Ikemeh is recognized for her efforts to protect rare chimpanzees particularly in the southwest part of the country, and for promoting community engagement and participatory conservation.

“Rachel is working alongside local authorities to limit illegal activity and scale up enforcement within the reserves,” said the Whitley Fund for Nature. “She will set up management and protection for the new conservation areas where extractive activities are prohibited, giving chimps a chance to recover.”

And “frog lady” Jeanne Tarrant of South Africa works for the Endangered Wildlife Trust (EWT), where she manages the Threatened Amphibian Programme. It’s the only NGO in South Africa to include frogs as a conservation focus.

“While South Africa has excellent environmental legislation, illegal developments continue to destroy frog habitats,” says Tarrant. “Our aim is to not only improve appreciation of frogs through research and education but use our slippery friends as flagships for the wider conservation of vital freshwater and terrestrial areas that are under the increasing threat of humans.”

Each winner will receive £40,000 in project funding to carry out their vital work. To see the complete list of winners, including 2020 Whitley Gold Award winner Patricia Medici of Brazil, check the Whitley Fund link here.