Home>Politics & Policy>China responds to COVID inquiry resolution, calls U.S. official 'lying blabbermouth'
By AT editor - 19 May 2020 at 2:37 am 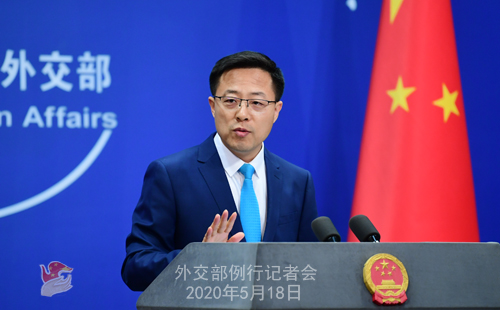 Beijing was on the defensive Monday, as the World Health Assembly in Geneva began with a draft resolution from 110 nations, many of them on the African continent, calling for an inquiry into the source of the deadly coronavirus believed to have originated in China in late 2019.

The seven-page draft resolution appeals for, among other things, a global effort to “identify the zoonotic source of the virus and the route of introduction to the human population, including the possible role of intermediate hosts, including through efforts such as scientific and collaborative field missions.”

The effort is supported by Djibouti, Tunisia, and the member states of the African Group, and follows initial calls from Australia and the European Union to determine exactly what caused the COVID-19 pandemic and what was China’s role in managing the outbreak in its earliest stages.

Chinese foreign ministry spokesman Zhao Lijian, speaking at a daily press briefing, played down the resolution and the language, insisting that it “demonstrates a scientific and professional spirit” within the global community rather than an effort to assign blame. China has consistently rejected statements from the United States and other nations that hold China accountable for the pandemic, calling them politically motivated.

Zhao also called U.S. Secretary of State Mike Pompeo a “lying blabbermouth” when asked about Pompeo’s recent remarks on the origin of the COVID-19 outbreak and China’s failure to be transparent about the virus.

“It’s a waste of time to comment on his fabrications,” Zhao said.

That said, Zhao reaffirmed China’s commitment to Africa through a cooperative partnership with the U.S., recently explored through a virtual meeting jointly hosted by South African and U.S. organizations last week.

“The current situation in Africa is grim,” Zhao said. “Closer cooperation between China, the U.S. and Africa can play an important role in African countries’ fight against COVID-19. China holds a positive stance on that.”