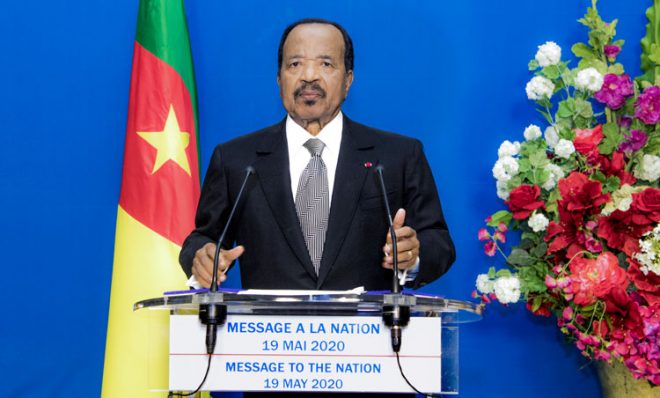 President Paul Biya of Cameroon has kept a low profile in recent months but delivered a televised address to the troubled West African nation to mark its National Day, one muted by the coronavirus pandemic and the absence of festivities.

The 87-year-old Biya focused on the COVID-19 crisis during his speech, urging Cameroonians to respond in unity despite the conflict and security crises that have divided the nation since 2016.

“Protective measures have already been taken to prevent the spread of COVID-19 on our territory,” he warned. “Despite this, the number of people infected is increasing day by day, providing proof that the fight against this pandemic is complex and difficult. I therefore invite each of you to get involved personally.”

Biya lamented the loss of celebration and joy during the Wednesday holiday while praising opposition politicians who have “put aside political quarrels” and presented a common front in the fight against the virus.

“I particularly invite all political leaders, all men of religion, all opinion leaders, all leaders of associations, all traditional leaders and all constituted bodies to continue to invest themselves fully in this fight,” he said.

Biya acknowledged the economic impact of the crisis on Cameroon along with policies to address them, including the suspension of some taxes, support for businesses and increased help for families. But he also stressed that social distancing, mask wearing and other practices must continue in order for the nation to succeed.

“As you can see, it will take a lot of effort to fight COVID-19, which can become a threat to the stability of our states,” he said, calling for a “sacred union” across the nation.

“I salute the attitude of almost all of the political leaders and religious authorities who have agreed to join this national fight,” Biya concluded. “Let us devote all our energies to the fight against this common enemy.”