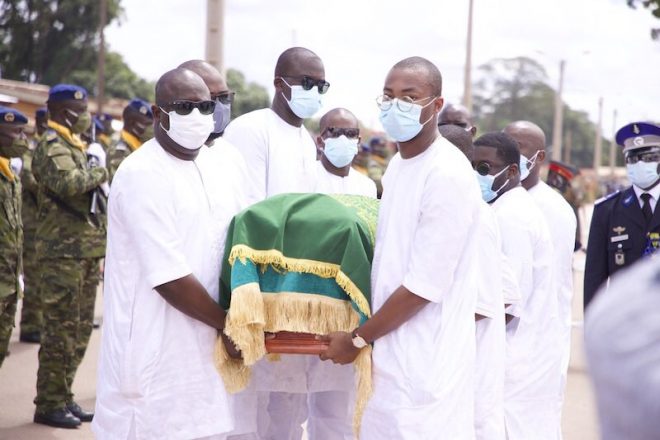 President Alassane Ouattara was on hand Friday for services to honor Amadou Gon Coulibaly, the former prime minister of Côte d’Ivoire who died on July 8.

Coulibaly was buried in his family hometown of Korhogo following a week of national mourning. He was 61, and had recently returned from France where he received medical care for a heart condition that afflicted him for years.

“It is with great sorrow that I attended this Friday the burial of my son,” said Ouattara, whose close relationship with Coulibaly developed across three decades in the West African nation.

Coulibaly’s death has added to the political uncertainty in Côte d’Ivoire, where he was considered a favorite candidate to win the presidential election scheduled for October 2020. He was selected to represent the ruling RHDP party after Ouattara announced in March that he would not seek a controversial third term.

The 78-year-old president has said he wanted to see a transfer of power to the next generation, despite the constitutional reforms and other measures that created a pathway his supporters believe will allow him to again stand for election. Those measures were bitterly opposed by the political opposition in Côte d’Ivoire.

The Independent Electoral Commission (CEI) in Abidjan began accepting filings for presidential candidacy on Thursday and will continue to do so through August 31, but all eyes are now on Ouattara – in power since 2010 – to see if he seeks a third term after all because of Coulibaly’s death.