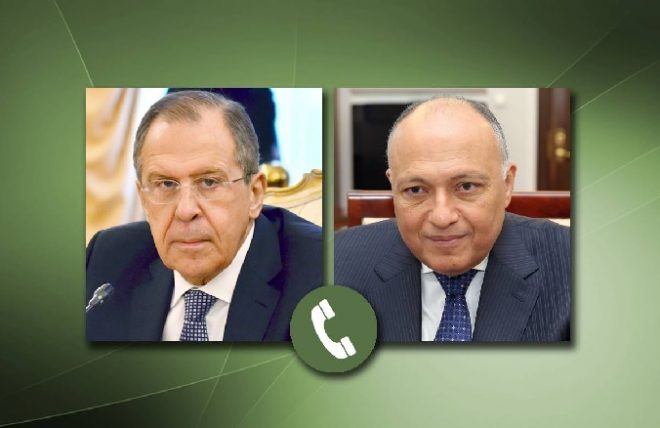 Egyptian Foreign Minister Sameh Shoukry urged the need for a ceasefire in Libya in order for political negotiations to move forward during his Tuesday telephone call with Russian counterpart Sergey Lavrov, but he also warned that Egypt makes its own security situation a priority.

Shoukry’s comments come one day after the Egyptian parliament approved the use of military troops in Libya if necessary, adding tension to a region where fighting continues between the Libyan National Army led by Khalifa Haftar and the Tripoli-based Government of National Accord supported by Turkey.

The Egyptian minister stressed his nation’s “rejection and response to any foreign interference in Libya for the serious threat it poses to the security and safety of the region,” the ministry said in a statement.

Egypt remains committed to the Berlin Conference negotiations and the United Nations Security Council resolution to support it, as does Russia, according to its foreign ministry.

The Egypt-Russia call comes just a day after President Abdel Fattah al-Sisi spoke with United States President Donald Trump, who also “affirmed the need for immediate de-escalation in Libya,” and amid claims from the U.S. Africa Command (AFRICOM) that private Russian security forces linked to the Kremlin were active in Libya.

Egypt, long aligned with Haftar, has advanced the need for the Cairo Declaration established last month as a mechanism to ensure success of the Berlin principles and establish a long-elusive Libyan dialogue on the nation’s future. A United Nations-led national dialogue was set to begin in April 2019 when Haftar, long in power in the eastern part of the country, launched an offensive on Tripoli that started a new round of fighting.

UNSMIL, the UN mission in Libya, said earlier this month that at least 102 civilians died in the fighting between April 1 and June 30, 2020. That’s up 172 percent over the first quarter of the year. Meanwhile, some 30,000 people have been forced to flee the fighting in Tripoli’s southern suburbs and Tarhouna, raising the total of internally displaced persons in Libya to more than 400,000.