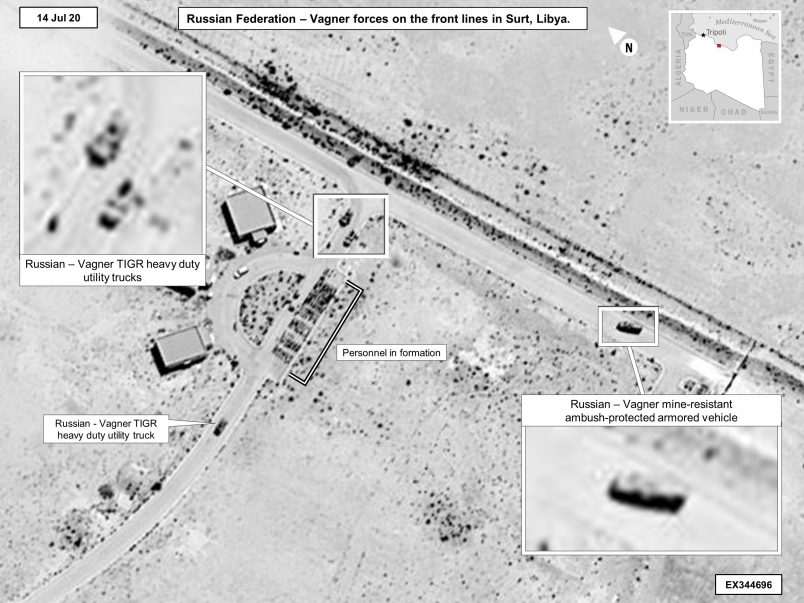 The United States on Friday added to what it says is the growing body of evidence that Russia, through the private military Wagner Group, is actively providing military equipment and fighters to factions in Libya in violation of a United Nations Security Council resolution that establishes an arms embargo.

U.S. Africa Command released satellite images with new information that warns of an illegal buildup, particularly in and around the hotspot of Sirte where forces aligned with the Government of National Accord are pressing against the Libyan National Army led by Khalifa Haftar, alongside the involvement of Turkey and Egypt.

The U.S. says the new images show Russian military cargo aircraft, including IL-76s, supplying Wagner fighters, and the presence of SA-22 and other Russian missile defense systems operated by Russians or their proxies.

Last week, the U.S. released images it says show Wagner-linked landmines and improvised explosive devices (IEDs) laid in and around Tripoli. In May, AFRICOM reported at least 14 Mig-29s, repainted to conceal their Russian origin, were flown into Libya.

The Wagner Group also has been accused of interfering in other African nations including the Central African Republic, where the 2018 death of three Russian journalists has been linked to their activities by investigators, and in Sudan during last year’s uprising against former president Omar al-Bashir.