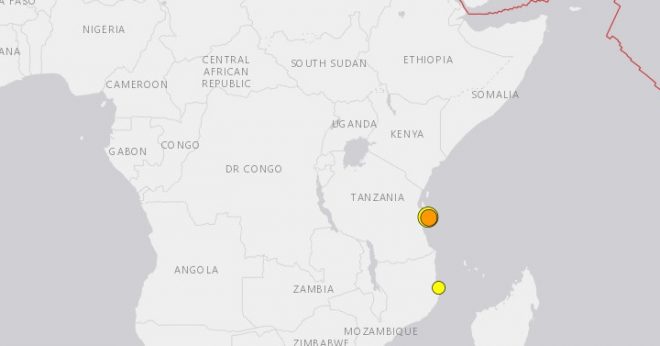 Tanzanians experienced a moderate earthquake on Thursday evening, one day after an unusually strong 6.0-magnitude earthquake struck just off the coast.

The new quake, measured at 5.0 magnitude, occurred in the same Indian Ocean spot about 93 kilometers southeast of Dar es Salaam. The United States Geological Survey estimated a depth of 10 kilometers, making it a relatively shallow quake.

The epicenter of Wednesday’s more powerful quake was just slightly closer to the Tanzanian coastline, with many witness reports collected by the European-Mediterranean Seismological Centre – including one nearly 900 kilometers inland. There were no immediate reports of damage or injuries.

“I was in bed and my bed shook for a few seconds,” said another witness, responding all the way from Kandara, a town to the northeast of Nairobi in Kenya.

Closer to home, residents of Dar said they felt a low rumble Wednesday and then window panes and furniture started shaking. Pets, they said, were as alarmed as the people.

“Frightening noises: we had to run out of the apartment and people were doing the same,” said one who experienced the quake from a six-story apartment building. “More emotional but no physical harm or damages noted.”

Moderate earthquakes are not uncommon in Tanzania and neighboring nations along the seismically active East African Rift, with some causing fatalities in recent years. A 5.9-magnitude earthquake in September 2016 caused 16 fatalities near the Tanzania-Uganda border, along the western edge of Lake Victoria.

Both of the new earthquakes near Tanzania followed a 4.9-magnitude quake earlier this week near Mozambique, also just off the coastline but hundreds of kilometers to the south.