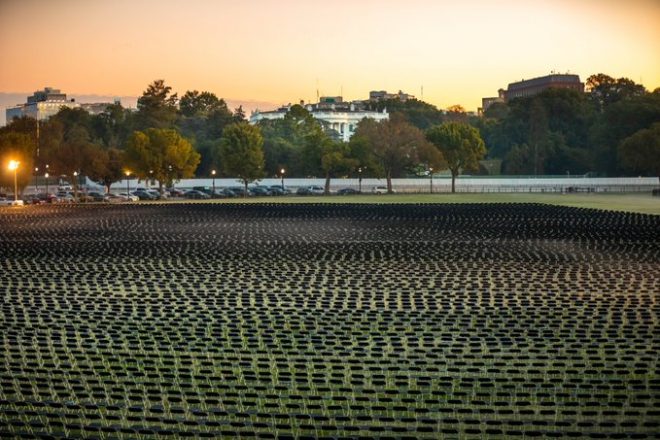 There were 20,000 empty chairs set up in view of the White House on Sunday as part of a memorial for those lost to the COVID-19 pandemic, even as President Donald Trump remained in the hospital himself following a positive diagnosis for the virus.

The chair represented “a fraction of the heartbreaking and unimaginable loss of 200,000 lives to COVID-19 in just six months,” said singer and former presidential health ambassador Dionne Warwick, who hosted the event.

“It’s time to stand with all the survivors and Americans who have been devastatingly impacted. It’s time to thank the essential workers and treat this pandemic as it is: an incredible tragedy. And most of all, it’s time to pray for those still suffering and for our nation to unite and come together to mourn and honor the precious lives lost.”

Among those honored was Dr. Maima Darbah Fahnbulleh, a Liberian born in Robertsport who emigrated for study in Canada and the United States but returned to West Africa to work with people with disabilities. She died because of the coronavirus on May 7.

“I can still hear her voice,” said Fahnbulleh’s daughter, Konah Bernard, who spoke at the memorial.

“She was so wise,” added Bernard, who hopes to continue what she called a legacy of hope, love, advocacy and excellence.

The event organized by Covid Survivors for Change was planned before the news that Trump and his wife, Melania, tested positive for the virus alongside other high-level American officials. Trump remained hospitalized on Sunday, where doctors said he was receiving treatment for symptoms that included at least two episodes of low-oxygen saturation.