Home>African Future>Tanzania sees progress on Kilimanjaro wildfire
By AT editor - 14 October 2020 at 8:24 pm 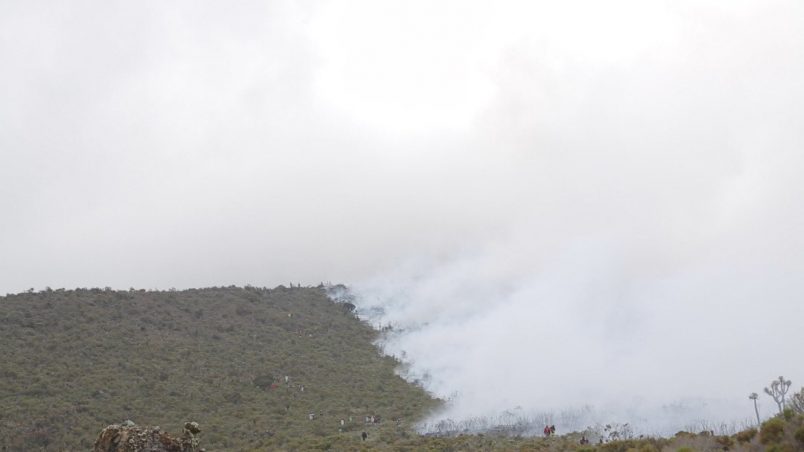 Tanzanian environmental minister Hamisi Kigwangalla visited the scene of a wildfire burning through Kilimanjaro National Park on Wednesday, checking on fire suppression efforts and thanking those battling the flames.

Community volunteers have joined professionals in working to put out a fire that TANAPA, the Tanzania National Parks authority, said broke out on Sunday. Images shared by Kigwangalla showed workers armed with shovels, rakes and other tools taking to the slopes of Kilimanjaro – Africa’s highest mountain peak and a top tourist destination – as swaths of the mountainside remained smoky.

An initial investigation into the fire finds it was accidentally started near Whona, where porters who support Kilimanjaro’s mountain climbers were cooking when the fire got out of control. Whona is on the lower portion of the Marangu Route on the southeastern side of the mountain.

“As you know this is a dry season and fire spreads very fast,” said a TANAPA spokesman during a press conference to discuss fire developments on Tuesday. TANAPA also said the fire at the Mandara Hut, at about 2700 meters elevation, did not reach the rainforests on the mountain.

But the fire has burned through about 15 miles of shrubs and other vegetation, raising questions about the environmental impacts of this and other fires on the mountain. A 2019 study led by scientists from Julius-Maximilians-Universität Würzburg (JMU) in Germany found that even moderate land use changes in the savanna zone at the base of the mountain resulted in a 50 percent loss of species.