Home>Commentary>Presidential election in Guinea: troubling signs for Alpha Condé after the first round
By AT editor - 19 October 2020 at 1:20 am 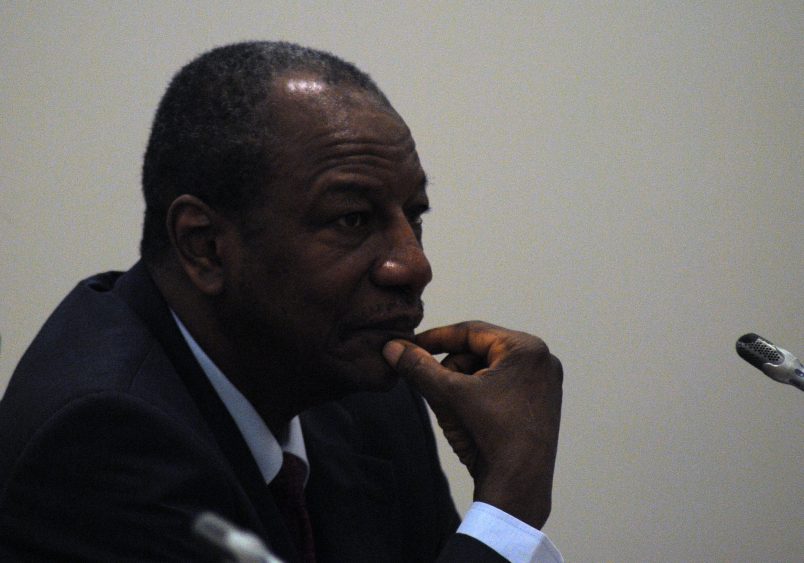 After widespread protests in the lead-up to the vote, Guinea carried out the first round of its presidential election on Sunday, 18 October. The vote drew particularly international scrutiny due to the fact that 82-year-old incumbent Alpha Condé was among the 12 candidates on the ballot, having pushed through a controversial constitutional amendment in March allowing him to stand for a third term.

According to preliminary estimates on the ground, and apparently corroborated by the NGO Stand for Life and Liberty (S2L), former Guinean Prime Minister Cellou Dalein Diallo, who heads the Union of Democratic Forces of Guinea (Union des Forces Démocratiques du Guinée, commonly abbreviated UFDG) is significantly in the lead and may be elected without the need for a second round of the elections. A first-round victory for Cellou Dalein Diallo would represent a startling rebuke for Alpha Condé, who has been criticised by international observers for turning increasingly authoritarian over his tenure at Guinea’s helm. However, although they seem to reflect a dynamic, these initial estimates remain partial and only the INEC and the Constitutional Court are empowered to proclaim the official results.

Early estimates show that Condé’s bid to change the country’s constitution in order to strive for a third term in power, despite polls indicating that 82% of Guineans supported a two-term limit, has struck a severe blow to his popularity and that of his political party, the Rally of the Guinean People (Rassemblement du People Guinéen, or RPG).

In Maritime Guinea, one of the country’s four natural regions with a majority Susu population, Susu politician Kabèlè Abdoul Camara, the head of the Guinean Rally for Development (Rassemblement guinéen pour le développement) party, is leading with 35% of the vote, ahead of Alpha Condé (31%). The result is a severe disappointment for Alpha Condé, who grew up in Maritime Guinea and won 50.21% of the region’s vote in the 2015 presidential elections.

Condé is also set to lose vote share in Upper Guinea, where the majority of the population shares his Malinké ethnicity. The incumbent president is projected to come in second with roughly 35% of the vote, behind economist and former ally Ousmane Kaba, now the head of the Party of Democrats for Hope (Parti des democrats pour l’Espoir). Kaba, whose campaign has focused on national unity and rebuilding crumbling infrastructure, is predicted to take 37% of the vote in Upper Guinea.

Alpha Condé’s principal rival Cellou Dalein Diallo, meanwhile, is reportedly significantly in the lead in the Forested Guinea region with 43%, a lead which – in combination with the fact that Diallo has reportedly clinched more than 90% of the vote in Middle Guinea – may prove significant enough to earn him a first-round victory in the presidential election, even if a second round on 24 November seems most likely in the current context. In that case, the coming weeks until the next vote will likely be highly charged with anticipation.

Condé’s third-term gambit has drawn significant attention in the region and in the broader international community. Ahead of Sunday’s vote, the United Nations warned against weaponizing the country’s ethnic divisions after Condé was accused of exploiting ethnicity in some of his campaign speeches.

Condé has denied exploiting ethnicity, but tensions undeniably ran high prior to the vote. Guineans started protesting in early October 2019, more than a year ago, against the possibility of a third term for Condé, and were often met with significant police pushback.

According to Amnesty International, protests on the day of the referendum to change the constitution were particularly gruesome, with at least 12 demonstrators killed, nine by gunfire. The repression by security services has brought back uncomfortable memories of the authoritarian and military rule which marred Guinea’s early history as an independent nation, culminating in the brutal massacre on 28 September 2009 in which at least 160 opposition supporters were killed by the security forces.