Home>Politics & Policy>Wine targeted again as Uganda moves toward presidential election
By AT editor - 1 December 2020 at 11:03 pm 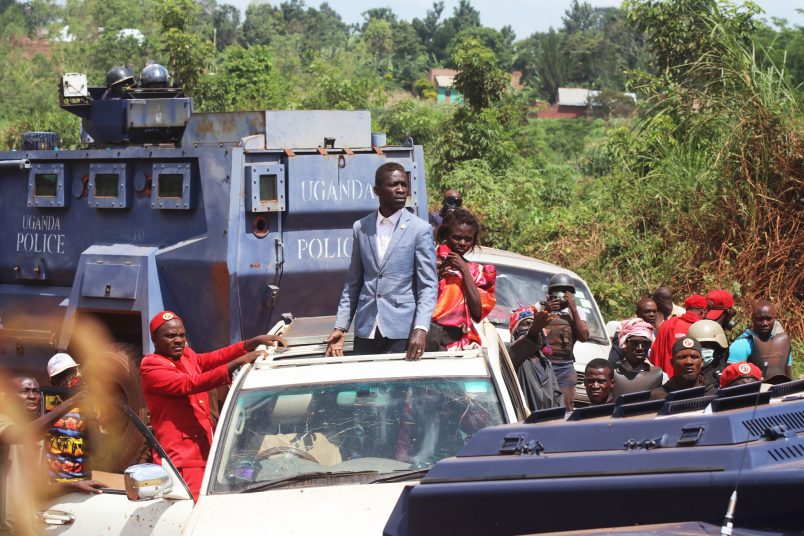 Opposition candidate Bobi Wine and his National Unity Platform party endured another round of clashes on Tuesday in Uganda, where the popular singer and member of parliament hopes to unseat President Yoweri Museveni in January’s presidential election.

Wine, MP for the Kyadondo East area in Kampala, said supporters gathered for campaign events in Kayunga and Jinja but were blocked by Ugandan security forces who shot out their vehicle tires and fired rubber bullets into the crowd.

The windshield of Wine’s own vehicle was hit, with bullets narrowly missing MP Francis Zaake – a longtime ally and frequent Museveni critic – and Wine’s driver. A similar incident in 2018 left former driver Yasin Kawuma dead and sent Wine to the United States for medical treatment.

“Many members of our campaign team have been seriously injured,” said NUP in a statement. “Among those injured are (music) producer Sir Dan Magic, who is bleeding from both the nose and ears.”

Wine said his campaign was prevented from talking with Ugandans after the incident, which marks the latest escalation between Wine and Museveni’s government forces. Museveni confirmed during a Sunday security briefing that at least 54 people have died in what he described as riots that targeted police and supporters of his ruling National Resistance Movement Party.

Wine, whose real name is Robert Kyagulanyi, has opposed Museveni’s run for another term after serving in office since 1986. The president, now 76, secured the right to do so after a controversial 2017 ruling that removed a constitutional age limit that would have ended his tenure.