Home>Commentary>Honeymoon could soon be over for Erdogan’s Turkey in Africa
By AT editor - 23 December 2020 at 12:48 pm 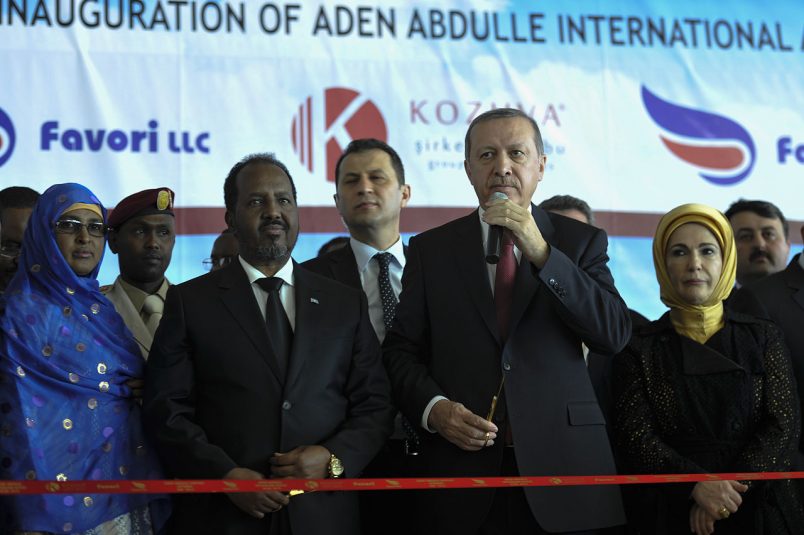 In the nearly ten years since Recep Tayyip Erdogan made his famous visit to Mogadishu in August 2011, Turkey has rapidly become one of Somalia’s most important (and generous) international benefactors. After Erdogan became the first head of state from outside of Africa to visit Somalia since the country’s disastrous civil war erupted in 1991, the Turkish government and Turkish companies have spent lavishly on Somalia’s development needs.

Between 2009 and 2014, Turkish aid spending in Africa had skyrocketed from roughly $31 million to $400 million annually. Much of that money (an estimated $1 billion by 2018) has gone to Somalia, funding development projects such as transportation infrastructure and schools. Today, Mogadishu’s primary airport and seaport are both run by Turkish firms. A Turkish special envoy for Somalia has even gotten involved in diplomatic talks with the breakaway region of Somaliland.

For all the good will a decade of direct engagement has fostered, the harder edge of Turkish involvement could soon sour public opinion towards Turkey. Earlier this month, Somali opposition parties reached out directly to the Turkish embassy in Mogadishu, beseeching Ankara to halt a major shipment of small arms and ammunition bound for the Turkish-trained Harma’ad special policy unit, immediately after the unit opened fire on protestors.

The letter, which gave voice to fears Somalia’s President Mohamed Abdullahi Mohamed could use the Harma’ad to “hijack” the country’s electoral process, also spoke to the Turkish government’s central role in training and equipping Somali military and police forces. The country is home to the $50 million Camp TURKSOM, built in 2017 and Turkey’s largest overseas military installation. If, as Somali opposition forces fear, Turkey finds itself complicit in a violent power grab in the months to come, Erdogan’s diplomatic outreach throughout the rest of Africa could find itself indelibly tarred with a “neo-Ottoman” brush.

Challenging France in her former backyard

The long-term success of Turkey’s involvement in Somalia could have considerable bearing on how Turkish outreach is perceived in West Africa, which has been an area of focus for Ankara in parallel with the Red Sea and the Horn of Africa. At the start of the year, Erdogan himself traveled to Algeria alongside Senegal and the Gambia, as part of a diplomatic outreach effort to “one of Turkey’s most important gateways to the Maghreb and Africa.”

Good relations with Algeria, once the western frontier of the Ottoman world, are essential for expanding Turkish influence among Algeria’s Sahel neighbors. Foreign minister Mevlut Cavusoglu set a milestone for Turkey’s relationship with Mali when he became one of the first foreign officials to travel to Bamako after the country’s coup in September. Meanwhile, in Niger, a military cooperation agreement signed by Cavusoglu in July could set the stage for yet another Turkish military base in Africa, conveniently located just across the border from Turkey’s ongoing military intervention in Libya.

Turkish activities in all four countries are an obvious shot across the bow for France, the former colonial power in the region and ostensibly Turkey’s NATO ally. The relationship between Paris and Ankara has devolved into a fierce rivalry across the Eastern Mediterranean, with France rallying behind Greece and Cyprus in a maritime dispute over offshore energy and quietly supporting the forces of Libyan general Khalifa Haftar against the Tripoli-based government backed by Turkey. By directing aid funding, investment, and diplomatic outreach towards former French colonies in West Africa, Erdogan is challenging France’s regional influence in a way Paris is unlikely to take lying down.

East Africa could test whether Turkey can transcend religious divides

Turkey’s ambitions across Africa, though impressive in their scope, diverge from Chinese, American, and European relationships with African countries in one critically important way: religion. Turkey’s appeals to shared Islamic identity offer obvious advantages in engagement with Muslim-majority societies in Somalia, Sudan, Algeria, Mali, and Niger, where Turkey’s “similar culture” can give Turkish firms an edge in competing for contracts. Beyond the borders of the Islamic world, though, Ankara has yet to show concretely that its influence can take root.

Recent contract successes by Turkish companies in East Africa could represent a shift in that narrative. Yapi Merkezi, for example, has secured part of a major rail project in Tanzania, financed in part by the Export Credit Bank of Turkey. Just last month, meanwhile, Kenyan media reported Turkish logistics firm Çelebi Aviation Holding has secured a majority stake in the Siginon Group, owned by the wealthy family of former Kenyan president Daniel Moi.

The acquisition gives Çelebi a controlling share in a company active across the region, with operations in Kenya, Tanzania, and Uganda. It also puts the Turkish firm in business with influential Kenyan senator Gideon Moi, son of the late president. The Çelebi-Siginon tie-up lines up closely with Turkish trade policy aims in the Kenya and the region; as seen in neighboring Somalia and Tanzania, Turkish private investment in infrastructure and logistics fit neatly with the government’s foreign policy aims.

This particular transaction, however, could carried unexpected risks for both Çelebi and its new partners in Kenya. Gideon Moi has now effectively pinned his high political profile to a company that has run into issues in other markets, losing a major contract at the Vienna international airport last year and sparking controversy with layoffs of hundreds of employees in India. Similar layoffs in Kenya could carry major political costs for Moi, especially if they kick up nationalistic public sentiments towards a foreign firm buying up a strategic asset and then cutting jobs. Conversely, if Moi runs for president in 2022, Çelebi could find itself seriously exposed amidst Kenya’s tense, ethnically-riven electoral politics.

Willingness to tolerate those kinds of risks, however, has already become a hallmark of Turkey’s Africa policy. Be it in Somalia, Libya, or other politically fragile African states, Erdogan has amply demonstrated his willingness to buck international pressure and set aside notions of diplomatic prudence in his quest to set the narrative of a resurgent Turkey, domestic political turmoil and economic crisis be damned.