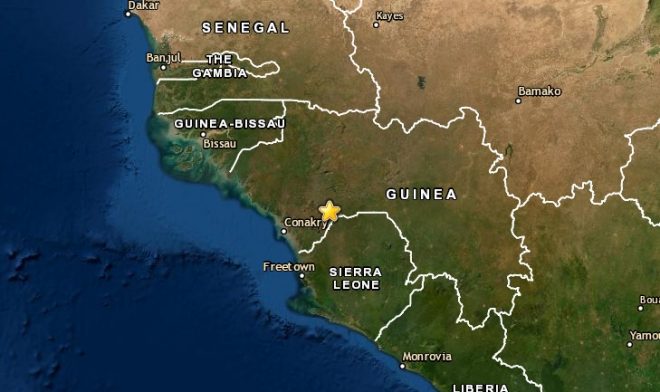 A rare earthquake rattled the West African nation of Guinea on Wednesday, but there were no immediate reports of damage or injuries.

The magnitude-5.0 quake struck at 9:55 a.m. local time in the country’s interior, about 39 kilometers east of Tondon in the Kindia region, according to the United States Geological Survey. The shallow quake was felt widely across the region, including the coastal capital of Conakry.

“A very strong earthquake shook for 10 seconds,” said one witness from Kindia. “Such an earthquake has not been for years.”

Another from Tanéné, about 150 kilometers away in the Boké region, said there was a strong vibration that lasted about eight seconds. “I haven’t felt an earthquake like this for a long time,” they added.

Scientific observers said the seismic waves registered on instruments more than 1,000 kilometers away in Côte d’Ivoire. The quake happened away from the continent’s tectonic plate boundaries, according to EMSC, in what is called the West African Craton region.

The last such incident in the region is believed to be a 5.5-magnitude earthquake that struck the island nation of São Tomé and Príncipe in December 2019 and was felt across the West African mainland.

The authors of a 2018 paper on African seismicity note that the largest West African earthquake in modern times occurred in Ghana in 1939 with a 6.8-magnitude event responsible for many casualties. It is unusual, but not unheard of, for large Atlantic Ocean quakes to be felt in Liberia, Sierra Leone and other coastal nations.