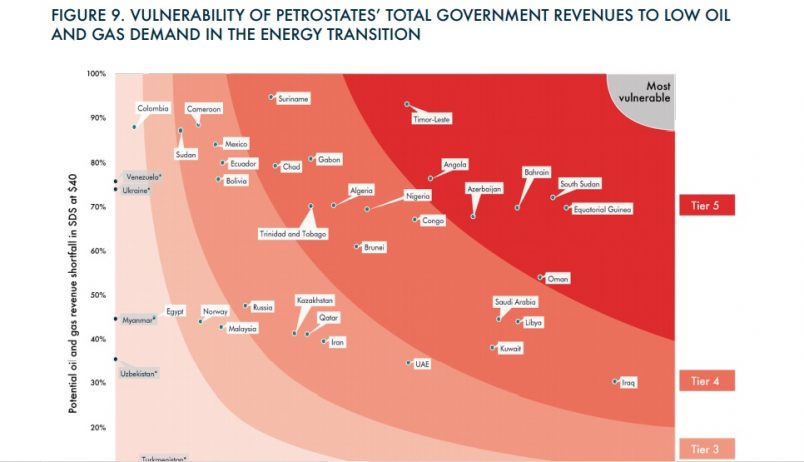 Angola, Equatorial Guinea and South Sudan are among nations forecast to see 40 percent or more in lost revenues as the world moves away from fossil fuels, according to a report released Thursday by Carbon Tracker.

They’re among the most vulnerable of 40 nations studied, with economies that rely on oil and gas but face trillions of dollars in shortfalls. Hardest-hit will be the Middle East and North Africa, West Africa and some Latin American nations, with the “Beyond Petrostates” report calling on governments to plan immediately for a clean energy future.

A low-carbon scenario that limits climate change will mean US$13 trillion in lost government revenues overall, and a 58 percent drop over the next two decades for African nations. That will further stress countries from Nigeria and Libya to Algeria, Senegal and Gabon.

“Petrostates will need to act now to transition away from a dependence on fossil fuel revenues. Propping up a failing oil and gas industry has huge opportunity cost,” said the report team, led by senior analyst Mike Coffin.

“Further, the international community has strong incentives to support this journey. We summarize potential policy
options available in the context of the ‘just transition.'”

Many of the affected countries are experiencing high population growth when compared with other countries. Nigeria’s population will grow to 329 million in the next 20 years; that’s a 60 percent increase, where the UK population is forecast to rise by just 7 percent in the same timeframe.

“This will increase spending pressure on the Nigerian government, all while revenues are being drained by weaker oil and gas receipts,” the Carbon Tracker report said.

Many oil-producing nations are working on diversification, but the report calls on the international community to assist in their economic transformation.

“The key to the Paris Agreement’s success lay in its recognition that each country needs to forge its own path in meeting the climate crisis,” the authors said. “The same will be true for the petrostates, but that does not mean that they should stand alone in facing the economic challenges to come.”