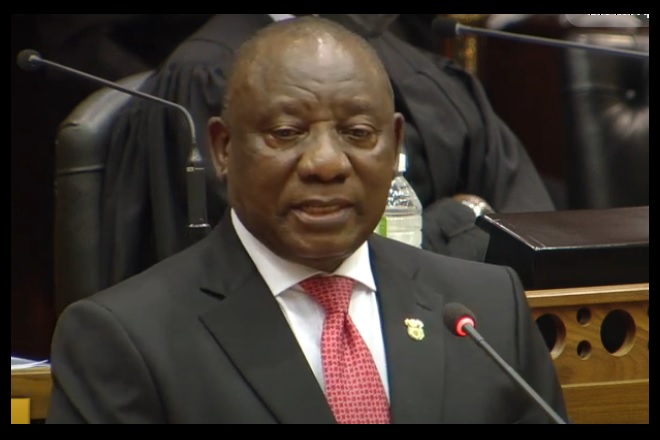 South Africa must prioritize both the fight against the coronavirus pandemic and the country’s economic recovery, especially with an eye toward climate change and the energy sector, the president said during the annual State of the Nation address.

President Cyril Ramaphosa compared his nation to the fynbos, a South African wildflower that survives under harsh conditions but returns even stronger after the desolation of a hot summer.

“Like a wildfire that sweeps across the mountainous ranges where the fynbos grows, a deadly pandemic has swept across the world, leaving devastation in its path,” Ramaphosa said. “And yet, like the hardy fynbos of our native land, we too have proven to be resilient in many ways.”

More than 45,000 people have died from the coronavirus in South Africa, even as the virus evolves into other strains including the 501Y.V2 variant. Ramaphosa said the nation is shifting to the Johnson & Johnson vaccine as a result of concerns over vaccine efficacy against the emerging variants, with the first 80,000 doses expected next week.

“But it is not just this disease that we must defeat,” Ramaphosa said. “We must overcome poverty, hunger, joblessness and inequality.” Unemployment in South Africa stands at a sobering 30.8 percent.

Part of South Africa’s economic recovery plan focuses on reducing imports by 20 percent over the next five years, and expanding jobs through infrastructure projects. Putting an end to corruption also will advance the country’s economic growth.

“The revelations from the Zondo Commission of Inquiry lay bare the extent of state capture and related corruption.  Testimony at the commission has shown how the criminal justice system was compromised and weakened,” the president said.

“It is, therefore, vital that we sustain the momentum of the rebuilding effort that we began three years ago.”