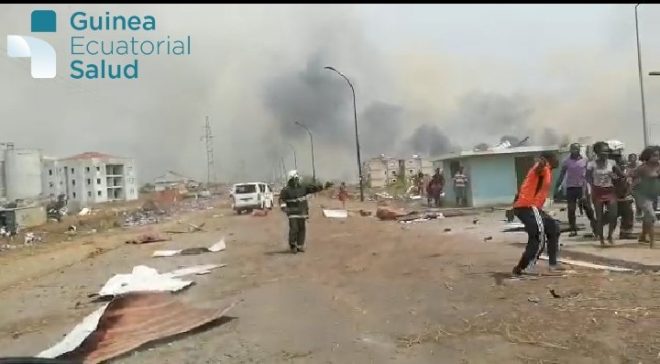 At least 98 people are dead and hundreds injured after a series of explosions rocked the port city of Bata in Equatorial Guinea on Sunday.

Images shared by Radio Macuto showed shattered and burned out buildings at a military barracks in the Nkoantoma neighborhood of Bata, where residents reported hearing four separate explosions. People living within a four-kilometer radius of the site were evacuated though many appeared to be fleeing their damaged homes already even as the explosions continued.

Diosdado Vicente Nsue Milang, the country’s health minister, said many people were still missing and officials in Equatorial Guinea had feared the death toll would rise.

“The number of injured in the Bata explosions is more than 400 people,” the ministry said. “Our health professionals continue to provide care at the scene of the tragedy and in health centers.”

The tally of injured rose to 615 on Monday. Some 300 people remained hospitalized at the Bata Regional Hospital, La Paz Medical Center and Guinea Salud Polyclinic. Health care workers from across the city were asked to report for duty, while officials appealed to Equatorial Guineans to donate blood to assist the wounded.

The cause of the explosions remains under investigation, though President Teodoro Obiang Nguema publicly said the blasts were linked to storage practices of the explosives.