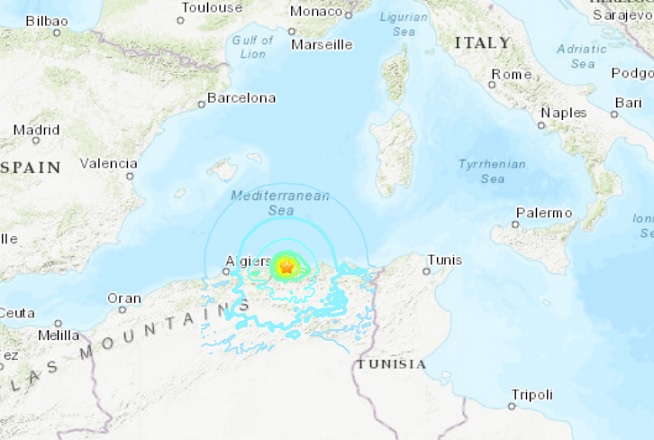 Authorities in Algeria say there were some buildings damaged by an earthquake that struck just offshore early Thursday morning.

The epicenter of the shallow, magnitude-6.0 quake was beneath the Mediterranean Sea, about 20 kilometers from the coastal city of Bejaïa, according to the United States Geological Survey. It reportedly was felt across nearby countries in the Mediterranean region.

People in the city of Bejaïa said they felt strong shaking, described by one witness as lasting about 15 seconds. Others saw objects falling in their homes.

“Residents of the region are in great panic and most families are sleeping in the streets,” said one in a report to the European-Mediterranean Seismological Centre. They added that an earthquake of that magnitude had not affected the region in quite some time.

Algerian authorities said at least three buildings partially collapsed but there were no reports of injuries or fatalities.

The Research Centre in Astronomy, Astrophysics and Geophysics (CRAAG) recorded seven aftershocks since the initial quake, the magnitude of which was placed at 5.9 by the Algerian agency.