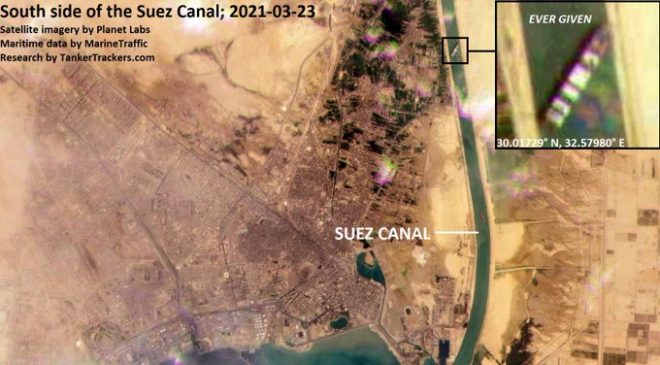 A container ship traveling through the Suez Canal got stuck on Tuesday, blocking traffic through the critical route and creating a bottleneck for dozens of other vessels.

The Panamanian-flagged ship, operated by the Evergreen Line, appeared to be heading from the Chinese port of Ningbo to Rotterdam, with other stops completed in Asia, according to data provided at vesselfinder.com. It was identified as the Ever Given and left Egypt’s Suez Port (Port Tawfiq) late Monday night after spending nearly 24 hours there.

But not long into its journey it stalled near Ma’diyah, just a few kilometers to the north. There it remained at midnight, with at least seven tug boats, all based in Egypt, trying to dislodge the Ever Given.

The 400-meter container ship was stuck at nearly a 45-degree angle across the canal, its bow pointing northeast and its stern to the southwest. Vessels to the north and south waited as the tugs tried to free the ship.

Another container ship and a bulk carrier sat in the canal, while tankers, vehicle carriers and even a yacht or two clustered at the southern entrance to the canal or off the coast of Fayed. Among them was the MNG Grenville, a research ship, and the Meamina, a yacht flagged in the United Kingdom.

While there was no immediate word on the situation from either the Suez Canal or Port Suez authorities, social media users were quick to take an interest.

“If you’re having a bad day, forgive yourself,” said one Twitter user. “At least you didn’t get this massive cargo ship stuck.”