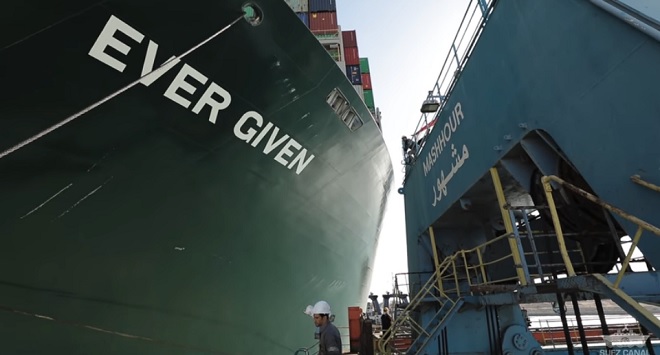 The massive container ship that blocked the Suez Canal to shipping traffic for nearly a week is free and the first southbound convoy of ships began moving on Monday.

Osama Rabie, head of the Suez Canal Authority (SCA), said  the MV Ever Given was refloated by using tugboats to strategically push and tow the ship. A video from the tugboat Mashhour, shared widely on social media, showed the crew celebrating their success with cheers as the Ever Given headed north behind them.

The plan is for the Ever Given to remain at the Great Bitter Lake for technical inspection.

The canal authority said 10 huge tugboats were used during the operation, some of them positioned at the bow to pull it north and others at the stern to swing the ship in line.

Port services provider Leth Agencies said there were at least 367 vessels waiting to transit through the canal at last count. They included 171 vessels headed north from the Red Sea and another 196, split between Great Bitter Lake and Port Said, waiting to head south.

Those finally on the move included the Ever Excel and the Ever Globe, also owned by shipping giant Evergreen.

The Ever Given became stuck early last Tuesday and has blocked the canal for nearly a week, amid mounting global concern about supply chain impacts and financial losses estimated at up to US$10 billion per day.