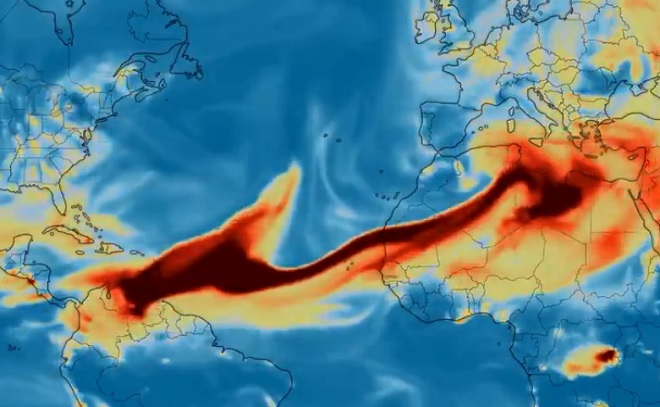 The explosive La Soufrière volcano in the Caribbean continues to affect the atmosphere over the African continent, with enormous sulfur dioxide (SO2) plumes stretching across the Atlantic Ocean.

Experts including Mark Parrington, a senior scientist with Europe’s Copernicus Atmosphere Monitoring Service, are sharing forecast and model images that show the flow of emissions reaching across North and West Africa.

Algeria, Niger and Burkina Faso are a few of the nations experiencing the SO2 drift, according to an update from volcano enthusiast John Seach. The cloud from La Soufrière also has reached Mauritania, Senegal and other West African nations and has traveled more than 6,500 kilometers, Seach said.

La Soufrière’s first explosive eruption happened on the island of Saint Vincent on Friday morning, though the volcano first started rumbling back to life back in December. There have been several huge explosions since Friday, with the most recent on Tuesday night as the volcano continues to spew ash, dust and gases into the atmosphere.

“Intense volcanic eruptions as the explosive ones of La Soufrière have also an impact on the global environment. In fact, they have a key role in the Earth’s climate due to the injection of particles and gases that can modify the radiative (heat) budget of the atmosphere,” said scientists Federico Fierli  and Jochen Kerkmann with EUMETSAT.

“The effect and intensity depends greatly on the total amount of mass and the altitude the eruption reaches. More intense eruptions can inject both ash and, more importantly, gases, as sulfur dioxide and carbon dioxide, up to the stratosphere at around 20 km high, where they can reside for longer periods and be transported around the planet.”