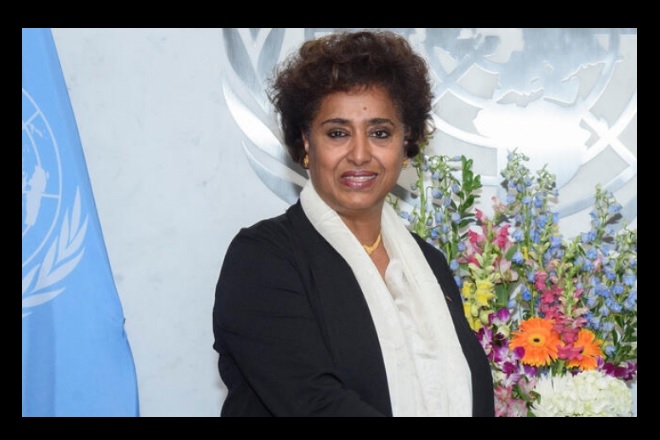 The Eritrean government acknowledged for the first time Friday that its troops are active in the Tigray conflict zone in northern Ethiopia, in a letter from Sophia Tesfamariam, the Eritrean ambassador to the United Nations.

Tesfamariam wrote the letter in response to last week’s U.N. Security Council meeting, in order to register Eritrea’s objection to claims of sexual abuse by soldiers and other allegations made by Mark Lowcock, head of the humanitarian aid agency UNOCHA, and Linda Thomas-Greenfield, the U.S. ambassador to the U.N.

“To begin with, let us get the facts straight,” said Tesfamariam. “The crisis in the Tigray Region of Ethiopia erupted solely because the TPLF clique – supported and emboldened for decades by certain powers – unleashed a massive, preemptive attack on all the contingents of the entire Ethiopian Northern Command.”

The purpose for the Tigray regional forces, she said, was to seize power from the Ethiopian military with the goal of invading Eritrea. The two countries ended a decades-long standoff in 2018 after Prime Minister Abiy Ahmed and Eritrean President Isaias Afwerki successfully negotiated a peace deal.

But that peace remained fragile as ongoing ethnic conflict continued in the Ethiopian north. Last year’s TPLF offensive placed pressure on both Abiy’s administration and the deal with the Eritreans, who did not previously admit their involvement in Ethiopia despite multiple calls from the international community to do so.

“As the looming grave threat has been largely thwarted, Eritrea and Ethiopia have agreed – at the highest levels – to embark on the withdrawal of Eritrean forces and the simultaneous redeployment of Ethiopian contingents along the international boundary,” said Tesfamariam.

The letter, meant for the members of the Security Council, also expressed Eritrea’s anger at the accusations made by Lowcock and Thomas-Greenfield, calling them outrageous and “a vicious attack on the culture and history of our people.”