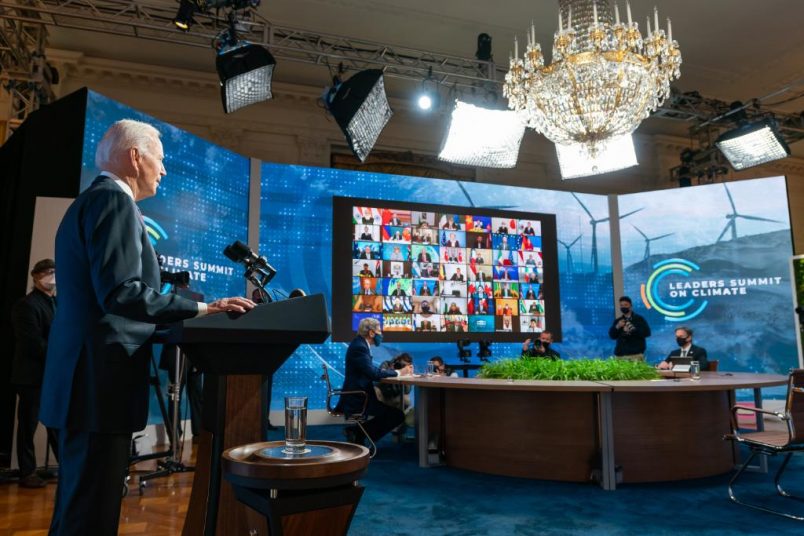 “With regard to our energy resources, we plan to build capacity to generate over 17 gigawatts of renewable energy by 2030,” said Ramaphosa, speaking at the Leaders Summit on Climate hosted by President Joe Biden of the United States.

“We remain committed to contributing our fair share to reduce global emissions, and to do so in the context of overcoming poverty, inequality and underdevelopment.”

South Africa was one of several nations from the continent to participate in the virtual summit, which included leaders and ministerial representatives from Nigeria, Rwanda, Gabon and Kenya. Aziz Rabbah, environment minister for Morocco, and Flavien P. Joubert, his counterpart from Seychelles, also were listed among speakers and participants.

Many of them, including African Development Bank chief Akinwumi Adesina, addressed the disparity between the mounting climate impacts Africans already experience and the historically limited carbon emissions for which their nations are responsible.

“The continent loses $7 billion to $15 billion a year to climate change, and this will rise to $50 billion per year by 2040, according to the IMF,” said Adesina. “Africa is not at net zero. Africa is at ground zero. We must therefore give Africa a lift to get a chance of adapting to what it did not cause.”

President Félix Tshisekedi of the Democratic Republic of Congo, the current African Union chair, urged summit leaders to deliver on the financial resources needed to make the climate transition.

“This should be substantial,” he said. “This also requires simplifying the procedures for accessing financing for the least developed countries, the majority of which are in Africa.”

The U.S. assured its support for the developing world with plans to double its public climate finance commitments in developing countries by 2024. A complete list of the Leaders Summit on Climate outcomes is available here.