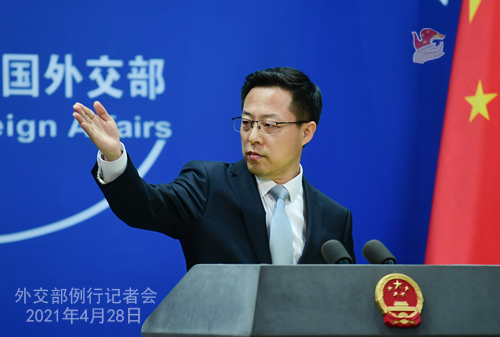 China’s foreign ministry spokesman warned against “big power” competition Wednesday when asked about United States influence on the African continent, following diplomatic meetings in which President Muhammadu Buhari of Nigeria suggested that the U.S. relocate its African headquarters closer to its African operations.

Buhari’s remark followed a virtual meeting with U.S. Secretary of State Tony Blinken, in which Buhari stressed the need for continued cooperation to meet Africa’s mounting security challenges and suggested the AFRICOM headquarters be moved closer to West and Central Africa, the Gulf of Guinea, the Lake Chad region and the wider Sahel.

Blinken also met with President Uhuru Kenyatta. U.S. officials – seeking to boost engagement with Africa –  said the U.S. commitment to African interests will demonstrate its strengths when compared against the Chinese. That left Zhao Lijian, a Chinese foreign ministry spokesman, with questions on Beijing’s response.

“If the U.S. is looking for big-power competition and to make African countries take sides, it’s sure to meet with rejection as that will only bring harm to the interest of African countries and people,” said Zhao.

He noted the historically strong relationships China has built with African nations, with the Forum on China-Africa Cooperation (FOCAC) serving as a vehicle to increase trade volume 20 times over and China’s direct investment by a hundredfold.

“Many African countries are now facing new challenges due to the COVID-19 pandemic,’ Zhao added.  “We hope the U.S. and the wider international community will pay more attention to resolve Africa’s concerns, grant greater support and input via more concrete actions to help African countries address challenges and achieve development.”