Home>African Future>Burundi villages inundated by water rise on Lake Tanganyika
By AT editor - 3 May 2021 at 7:31 pm 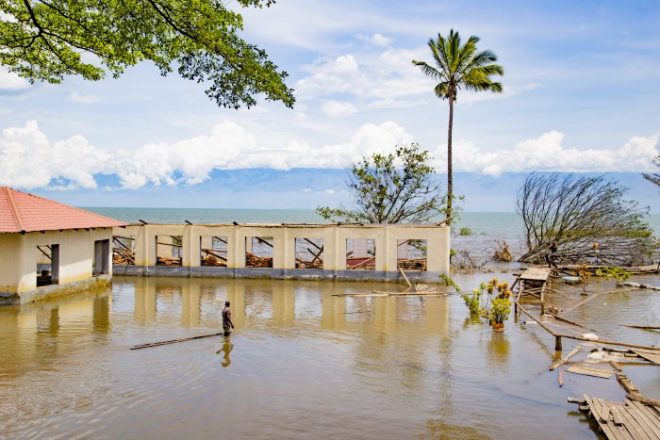 Increasing rainfall linked to climate change is a main factor causing the water level of Lake Tanganyika to rise, with Burundi – one of four African nations bordering the lake – taking the hardest hit.

More than 30,000 people have now been affected, with the rising waters forcing people from their homes and destroying crops. Farmers and fishers in coastal Mutimbuzi, as well as the Gatumba and Rukaramu districts, have lost an entire year’s worth of food, according to the International Organization for Migration (IOM).

Some routes into other villages are cut off by the water, which began rising more than a year ago but reached a tipping point in April. Many families have been forced from their homes, while some remain in their homes despite being partially submerged.

“They don’t know where to go. Some try to get the water out using bowls and pans, whatever they have,” said local IOM representative Innocent Kwizera. “People have spread out in the area so it can be very difficult to collect data quickly.”

IOM, local officials and partner agencies are working to assist people who have seen increased rainfall dating back to 2018 but have watched the water level rise dramatically since March. In April, levels at Lake Tanganyika measured at 776.4 meters above sea level compared with the normal average of 772.7 meters.