Home>SECURITY>Libya’s path to peace derailed by familiar roadblocks
By AT editor - 21 May 2021 at 1:11 pm 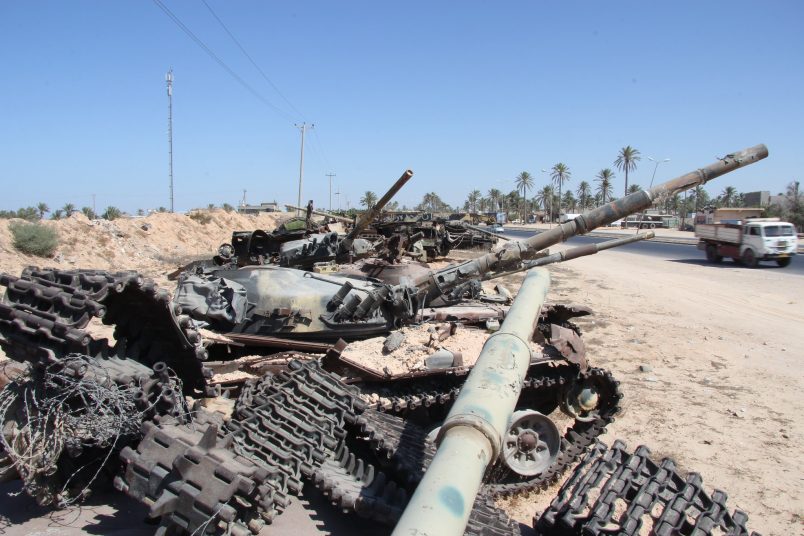 On May 18th, US diplomat Joey Hood became the highest-ranking American official to visit Libya since 2014, the year that Washington closed its embassy in Tripoli amid surging violence. Hood’s visit tempered optimism—the US dangled the possibility of eventually reopening its Libyan embassy—with clear concern over the likelihood of achieving “a sovereign, stable, unified Libya with no foreign interference and a state that is capable of combating terrorism”.

Indeed, this dream seems as elusive as ever, despite extensive military and diplomatic intervention—much of it disastrous— from the world’s leading economies in the decade since the fall of Gaddafi. In fact, the shine has already worn off the international community’s latest attempt to wind down the conflict, the supposedly-permanent ceasefire between Libya’s rival administrations, the Government of National Accord (GNA) in the west and Field Marshal Khalifa Haftar’s forces, who control much of the country’s oil-rich east. Until longstanding issues— including Turkey’s protracted interference and the fundamental weaknesses of the national unity government—are addressed, a stable peace in Libya will remain out of reach.

Foreign interference a lingering thorn in Libya’s side

The question of foreign interference has recently become a particular flashpoint. The ceasefire deal, brokered by the UN a mere seven months ago, was predicated on the withdrawal of foreign fighters which have been stoking the flames of Libya’s long-simmering conflict. As UN Secretary General Antonio Guterres reported earlier this month, however, large numbers of overseas troops and mercenaries, hailing from everywhere from Syria to Sudan, remain in Libya in violation of the deal.

Guterres’ warnings over the foreign fighters were particularly pointed in the wake of an uncomfortable diplomatic incident at the beginning of May. At a press conference in Tripoli alongside her Turkish counterpart, Libyan Foreign Minister Najla al-Manqoush publicly urged Ankara to cooperate with the withdrawal of foreign troops from Libya. Al-Manqoush’s request echoed clear language in both UN Security Council resolutions and the UN-brokered peace agreement between Libya’s eastern and western governments, as well as similar calls from international bodies including the EU, the Arab League, and the African Union—yet the harsh pushback which she received laid bare the lie that Erdogan’s regime has Libyans’ best interests in mind.

Victim of Turkish ambitions to boost clout and coffers

The Turkey-based radical Islamist cleric Sadiq al-Gharyani unleashed a torrent of vitriol against al-Manqoush, denigrating the top Libyan diplomat on his TV channel as “despicable and serving the Zionist project”. The government in Ankara, meanwhile, has been intransigent, refusing to withdraw its troops from Libya and insisting that Turkish soldiers should be considered in a different light than any of the other foreign forces present in the country, since they initially entered at the GNA’s invitation.

The rationale behind this insistence doesn’t hold up to closer scrutiny. For one thing, the Tripoli-based administration with which Erdogan signed a military agreement is no longer in power, replaced by the very unity government which is now urging Turkey to remove its troops. For another, Turkey’s Libyan intervention is hardly as altruistic as Ankara maintains.

Indeed, Erdogan’s administration had ample ulterior motives to save the GNA from collapse and to prevent Haftar’s eastern administration from seizing the capitol. With an economy in freefall, Turkey needed a compliant Libyan government in place to collect on the $19 billion of outstanding contracts which Turkish firms held. What’s more, the GNA offered what analysts have identified as an “overt quid pro quo”—in exchange for the military assistance it needed to survive, the GNA acquiesced to a deal seemingly extending Turkey’s maritime borders and giving Ankara access to vital energy resources in the Mediterranean.

Unsurprisingly, Erdogan’s administration, increasingly isolated on the global stage, has minimised these economic benefits of its ongoing intervention in Libya. Instead, Ankara has painted its military support for the GNA as a heroic foray which saved Libya from civil war. Had Turkey not propped up the GNA when Haftar seemed on the verge of seizing the capitol, Turkish foreign minister Mevlüt Çavusoglu claimed in a recent interview, “Libya would have plunged into chaos”.

Çavusoglu’s assessment is somewhat disingenuous: Libya has been mired in chaos since the NATO-backed uprising which ousted Gaddafi failed to replace the eccentric strongman with a stable state. In the ensuing vacuum, infrastructure crumbled, Libya’s tribal divisions deepened, and militias and jihadist groups proliferated. As he became Libya’s most powerful military leader as well as a potent political force, Haftar brought some order back to the badly fragilized country. At the helm of his Libyan National Army (LNA), Haftar mounted a years-long campaign against Islamist militants, clawing back swaths of territory and oil resources from the Islamic State and other extremist groups.

The offensive earned plaudits from international actors including the Trump administration—but it also made waves among Libyan observers, setting Haftar in sharp contrast to the UN-backed government in the west. A 2017 poll indicating that Haftar’s LNA was the most trusted institution in Libya came as no surprise given the GNA’s notorious inability to stamp out extremism, unify Libya’s fractured institutions and patchwork of tribes, or even provide basic public services.

Unfortunately, the new interim government, dubbed the Government of National Unity (GNU), seems to have inherited many of the GNA’s problems. Ministers were selected on the basis of clientelist ties rather than a common political vision or an ability to unify Libya’s disparate forces, while the GNU’s scant plans to address major security issues has already cast doubts on whether elections will go ahead in December as planned and leaves it dangerously dependent on Turkish security guarantees.

That suits Ankara just fine; Erdogan likely sees an opportunity to secure concessions which could boost Turkey’s ailing economy, while preserving the influence of Turkish proxies and affiliated Islamist groups.  As long as this status quo—marked by powerful Turkish interference and an ineffectual government in Tripoli—is not disrupted, Libya’s path to a sustainable peace will remain murky.