Home>Finance & Economics>Namibia's opposition rejects German reparations deal
By AT editor - 9 June 2021 at 2:19 am 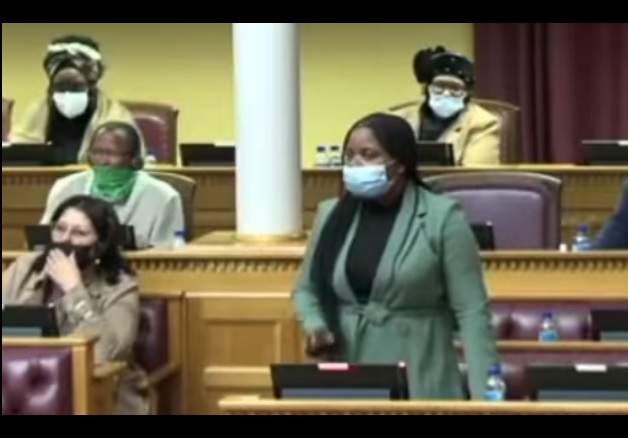 Namibian opposition leaders rejected a deal negotiated with Germany over the colonial-era deaths of Herero and Nama peoples during a contentious parliamentary session on Tuesday.

The agreement, sought for decades and announced in late May, included a concession from Germany that what happened from 1904 to 1908 did in fact constitute genocide. The governments agreed to a €1.1 billion reparations package that includes funding for reconciliation processes, development projects and land acquisition.

But that’s unacceptable to Popular Democratic Movement (PDM) leaders, and their counterparts in the Landless People’s Movement and other opposition and activist groups.

PDM member Inna Hengari, above, accused the Namibian government of selling out and said that, as a descendant of the affected communities, she rejected the deal. Hengari also said Namibian leaders exceeded their authority in negotiating on behalf of the Herero and Nama, whose ancestors were placed in concentration camps and whose communities were destroyed.

“How is it that we are expecting a German government to recognize, acknowledge and compensate for genocide and killings of Namibian people if our own government has failed to establish a day of remembrance,” she added.

President Hage Geingob has asked Namibians to accept the terms, even if it fails to meet their expectations. Vice President Nangolo Mbumba, speaking on behalf of Geingob as he recovers from COVID-19, detailed on Friday the lengthy process that finally led to Germany’s formal apology and the reparations that have always been denied.

He acknowledged the amount falls short of Namibia’s initial calculation of the cost of reparations, but “based on the principle of give and take” was acceptable with provisions for reassessment in the future.

“The Government appeals to all Namibians, especially the affected communities to remain calm and to think deeply about this highly sensitive matter,” said Mbumba. “The door of the Namibian Government remains open, as it has always been for meaningful advice, discussions and suggestions. The process of consultation is still ongoing.”