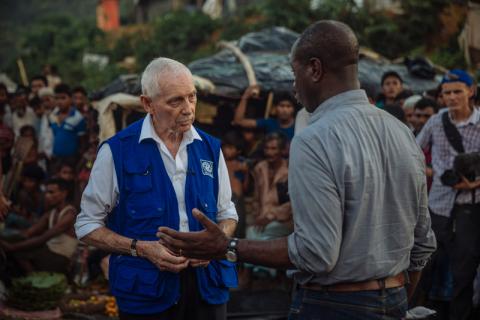 William Lacy Swing, a former director of the International Organization for Migration (IOM) and United States diplomat with several postings in Africa, has died.

“It is with a heavy heart that I learned of my predecessor’s passing,” said IOM Director General António Vitorino, who replaced Swing in 2018. “His was a life of service to his country and humanity, and a source of inspiration to us all.”

Swing died in Kuala Lumpur, Malaysia, where he and his wife, Yuen Cheong, lived after his retirement. The 86-year-old Swing was a career diplomat for four decades, serving in South Africa at the time Nelson Mandela was sent to Robben Island and returning as the ambassador who witnessed his release 26 years later.

He held posts as a U.S. ambassador in Nigeria, Liberia, Congo-Brazzaville and the Democratic Republic of Congo, as well as holding special envoy positions with the United Nations in the DR Congo and in Western Sahara after retiring from the U.S. Department of State.

Swing took the helm at IOM in 2008 and was a passionate champion of migrants and refugees, especially during the height of the Syrian crisis as thousands of displaced people risked Mediterranean Sea crossings.

Swing warned that Europe’s challenges with migration weren’t unique, climate impacts would drive more movement in the future, and policies like the 2018 Global Compact for Migration had the power to be transformative.

Vitorino and IOM extended their condolences to the Swing family and to the wider community he served.