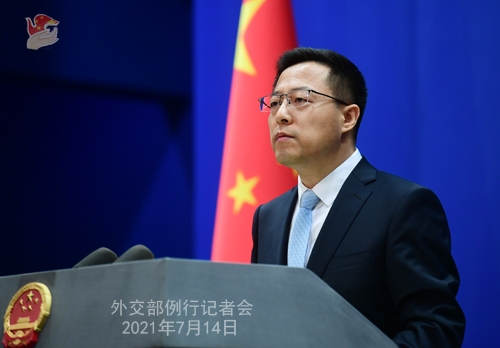 China has weighed in on a United Nations Human Rights Council resolution on racism and discrimination first introduced by African nations, but made no mention of the ongoing inquiries into its own treatment of Uyghur and other minorities.

Zhao Lijian, spokesman for the Chinese Ministry of Foreign Affairs, said Wednesday that the resolution – explicitly linked with the death of George Floyd in the United States last year – addresses “the scourge of systemic and structural racism” found in the U.S. and around the world. As is often the case, Zhao positioned China as standing apart from the colonialism and slave trade in Africa for which the U.S. and Europe were responsible.

“The adoption of this strong resolution will further galvanize international consensus and bring new impetus to the world anti-racism cause,” he said. “Countries who are beset by serious racism, racial discrimination, xenophobic violence and who engaged in or profited from enslavement, the transatlantic slave trade and colonialism should show the political will and courage to take responsibility for its crimes in history.”

The resolution and related report, first advanced last year by Burkina Faso, looked closely at the race-related deaths of Africans and people of African descent in the U.S., France and Brazil, among other nations. It establishes an independent panel of experts to investigate policing and race-related incidents.

“There is an urgent need to confront the legacies of enslavement, the transatlantic slave trade, colonialism and successive racially discriminatory policies and systems, and to seek reparatory justice,” said Michelle Bachelet, the UN High Commissioner for Human Rights.