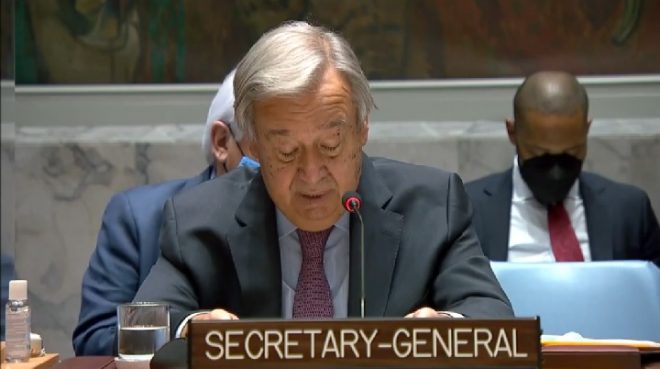 It’s been a week since any food or aid trucks were able to enter the Tigray region of Ethiopia, amid a mounting humanitarian crisis because of the unabated regional conflict.

Nearly a half-million people are on the brink of famine, according to OCHA, the United Nations office for humanitarian assistance. Those on the ground said they would usually need to see 100 aid trucks a day.

Another 2.1 million people are displaced, some of them heading into neighboring Sudan. And with a June ceasefire doing little to contain the fighting since, the UN put Ethiopia at the center of concern during a Thursday meeting of the UN Security Council.

“A military confrontation, which started some ten months ago in the northern region of Tigray, is spreading,” said UN chief António Guterres. “And the level of human suffering is growing — with serious political, economic and humanitarian implications for Ethiopia and the broader region.”

Guterres told the council that he believed the very future of Ethiopia was at stake, as violence spreads into other ethnically-based provinces of the country and new reports of Eritrean troops crossing the border are raising alarm.

The wider region is already witnessing the political, economic and social impact of the conflict beyond the borders of Ethiopia. Guterres said he remains in close contact with President Abiy Ahmed as well as Tigryan leadership.

The Security Council appealed for an end to the fighting and said they stand ready to assist the African Union in mediating the conflict.