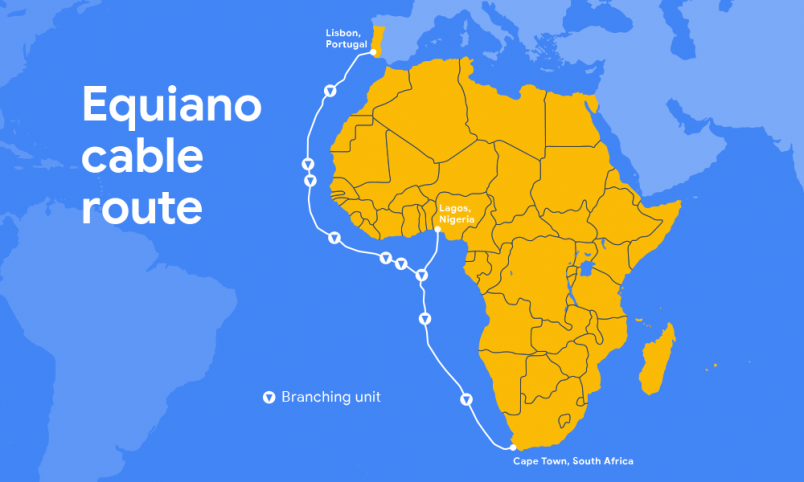 Google announced a US$1 billion commitment to the continent’s digital transformation during the company’s first-ever Google for Africa livestream event on Wednesday.

The investment, planned across the next five years, will support several initiatives. They include completion of Equiano, an undersea cable meant to improve Internet speeds and drive down the costs of connectivity for Africans.

The Equiano system, first announced in 2019, is expected to provide 20 times more capacity than any existing cable in the region. When fully complete, it will run offshore along the western coast to connect Portugal with South Africa.

Along the way it will branch off to other African nations with Nigeria planned as the first. Equiano is named for Olaudah Equiano, a Nigerian-born writer who was a slave taken to the Caribbean in his youth and became an influential anti-slavery leader in his day. He died in 1797.

Sundar Pichai, the CEO of Google and Alphabet, said the funding also supports a program for African startups and small businesses to access low-interest loans. An additional program will boost access to Android smartphone devices through partnerships with MTN, Orange and other providers.

“Through a Black Founders Fund, Google will invest in Black-led startups in Africa by providing cash awards and hands-on support,” the company said. The $50 million fund is in addition to Google’s existing support through the Google for Startups Accelerator Africa.

Another $40 million will go to innovators like the Airqo team at Makerere University, said Google. They’re using AI to monitor poor air quality and will receive another $3 million to expand the pilot program in Kampala to some 10 cities in five African countries.