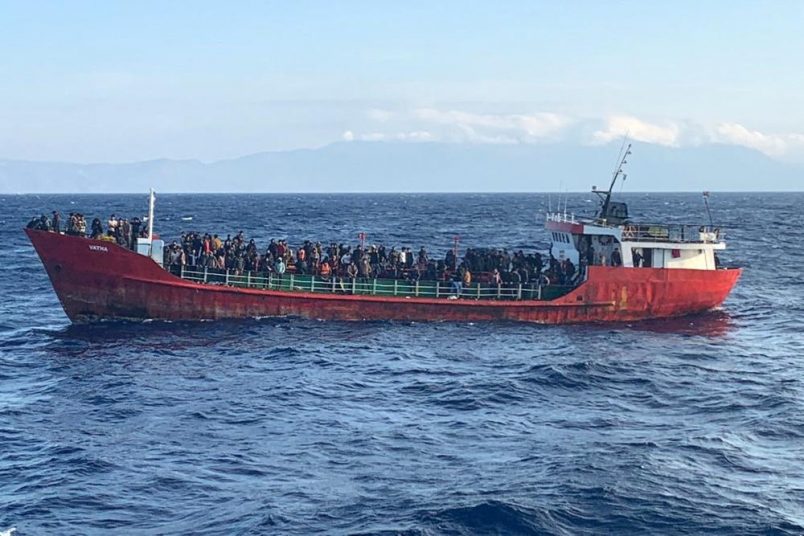 Officials in Greece have confirmed an ongoing search and rescue operation in the Mediterranean Sea east of Crete, following reports of a migrant ship in distress. Yet the situation remains a bit confusing, according to one NGO monitoring the ship’s fate.

On Friday, the Hellenic Coast Guard said they were conducting “one of the largest search and rescue operations carried out in the Eastern Mediterranean.”  The agency released an image of the Turkish-flagged cargo ship being towed, but it’s unclear what happened to it or the people onboard.

The Aegean Boat Report, a Norwegian migration NGO, first called attention to the migrants’ plight after getting reports that the disabled ship was drifting just south of Crete. The migrants, who said they are from Afghanistan, were en route to Italy but were turned aside by mechanical issues and bad weather in the Mediterranean Sea. Italy has been battered by a “medicane” storm that is forecast to cross the sea and reach Libya by Sunday evening.

The NGO raised questions about whether the migrants would be returned to Turkey, in keeping with a European policy that for years has caused bitter contention and division among most Mediterranean coastal nations. They asked why the boat wasn’t taken to Crete and disputed the Greek authorities’ claims that they had not found any migrant ship.

Greek officials have yet to answer those questions but said they plan to make an updated statement on the incident.

The International Organization for Migration (IOM) has seen an uptick in Mediterranean Sea fatalities this year, although less so on eastern sea routes. Most migrant fatalities occur after ships leave Libya and Tunisia, or on a West African route through the Canary Islands, a territory of Spain.

IOM director António Vitorino appealed earlier this month for more assistance for Afghan refugees. There are now an estimated 5.5 million internally displaced persons in Afghanistan, with 5.7 million more who have fled to other nations.