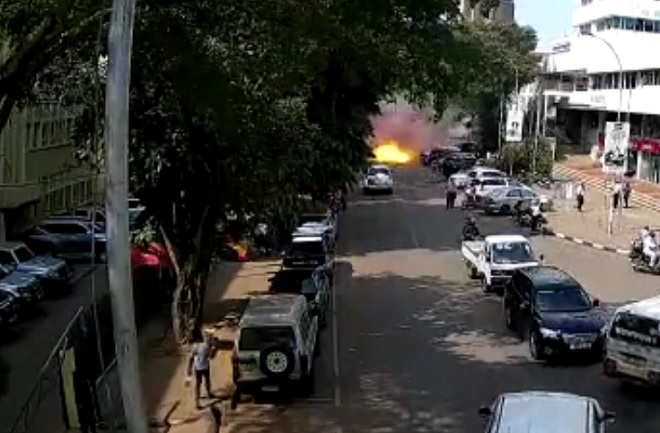 Islamic State has claimed responsibility for the twin bomb blasts that killed four people in Kampala on Tuesday, saying that three affiliated terrorists were responsible for the attacks along Parliament Avenue.

The Ugandan Police Force has said that Allied Democratic Forces (ADF) and aligned groups executed the attacks, the latest in a string of bombings targeting the capital. The ADF has a decades-long history in Uganda and neighboring Democratic Republic of Congo, and it remains uncertain how closely it is allied with Islamic State.

The police have said three bombers, identified on video footage from a nearby CCTV camera, also died in the attacks. A fourth was tracked down, shot by authorities and arrested while in possession of other explosive devices.

“All Ugandans should know that the terrorist threats are real and from a known enemy, that is the ADF who are linked to the domestic terror groups that we have around,” said police spokesman Fred Enanga. “We are determined to track them all down and all their agents, operatives and cooperators.”

Enanga identified the three others who died in the attack, including one police officer. There were 27 officers and 10 civilians injured in the blasts, including eight officers and five civilians who remain hospitalized. Ugandan media reports a fourth person has died but their identity is unknown.

Security remained tight around Kampala as the investigation continued. Enanga said counterterrorism task force members were combing through the neighborhood to locate other explosive devices and clearing away damage from the explosions.