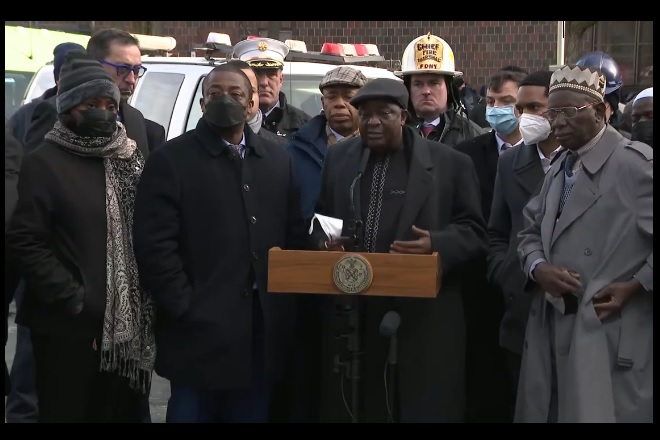 The Gambian ambassador to the United States, Dawda Docka Fadera, traveled to New York City to assist fire victims from his nation on Monday. He said the Gambian nation was in shock after hearing news of the fire, and that President Adama Barrow had asked him to convey his condolences.

He joined New York City officials as they updated the death toll following Sunday’s fire, which claimed the lives of many African immigrants living in the Fordham Heights neighborhood of the Bronx.

Mayor Eric Adams said 17 people died, including eight children, and another 13 people were in critical condition. Dozens of people experienced smoke inhalation and other injuries during the blaze, which happened in an older 120-unit high rise building with no fire escapes.

Adams said many of the residents were Muslim and came from The Gambia, as he assured the community that New York officials would remain sensitive to their cultural needs. The New York Times reported that other West Africans, including immigrants from Mali and Burkina Faso, were also victims of the fire.

In one case, 11 people from Mali were living in a three-bedroom apartment in the building. Two children died while another adult family member was still missing.

Fire officials said the fire was caused by a space heater that malfunctioned. An investigation continues into whether safety features of the building were working properly at the time of the fire.