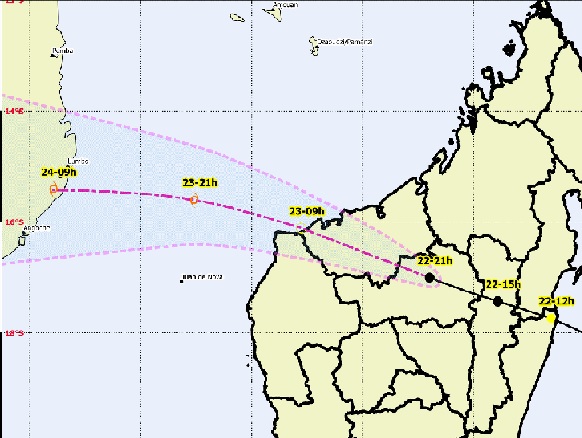 Authorities in Madagascar have posted red warnings for much of the country’s north, as heavy rains and wind from a tropical weather system crossed the island late Saturday.

“There is a lot of rain on the east side of the island,” said Météo Madagascar. “This case could result in flooding and landslides.”

The red warnings, indicating imminent danger, covered nearly two dozen districts on the east and west coast of the Indian Ocean nation. They included the capital city of Antananarivo.

Madagascar’s weather agency asked mariners and those working in the fishing industry to avoid the coastal waters as the storm passed. Météo Madagascar also reported power outages due to the winds.

The storm, technically a tropical depression, made landfall at mid-day on Saturday. Sustained winds were up to 56 kilometers per hour (km/h), according to the Joint Typhoon Warning Center. It was not designated as a tropical cyclone but appeared to strengthen as it approached Madagascar.

The storm is expected to move out over the Mozambique Channel and strengthen further as it heads for a second landfall along the coast of Mozambique.

Instituto Nacional de Meteorologia (INAM) in Maputo said it expects the storm to arrive on Monday in Nampula, Zambezia and Sofala provinces. Wind speeds are expected to be between 90 and 120 km/h when the storm arrives.

INAM also is calling for more than 100 millimeters of rain within 24 hours in the affected area.