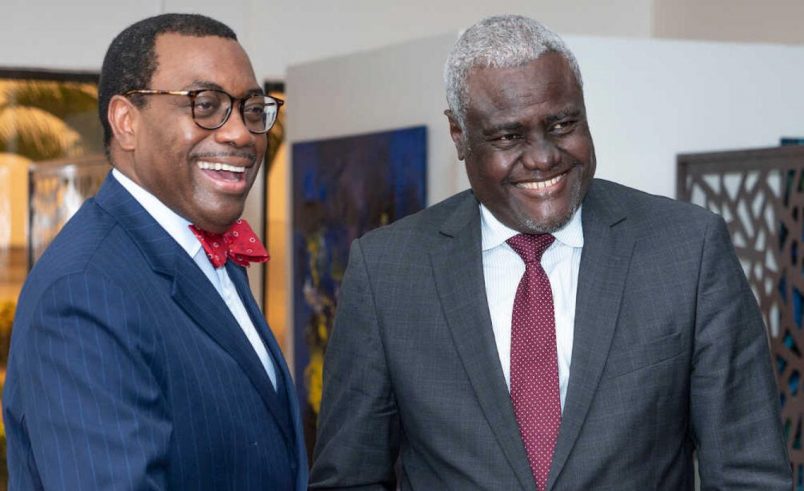 Akinwumi Adesina, head of the African Development Bank (AfDB), says he was in the VIP lounge of Dakar’s Blaise-Diagne International Airport with Senegal’s economic minister this week when another African dignitary walked in.

The surprise guest was Moussa Faki Mahamat, head of the African Union Commission. What followed, the AfDB said, was an unplanned diplomatic meeting between the two leaders.

“Free of officialdom, the conversation covered a range of important African issues,” the Abidjan-based AfDB said.

Topics included Senegal’s development agenda, and other infrastructure projects on the continent. Africa’s steps toward producing its own vaccines, beginning with a facility in Rwanda, also were a part of the conversation.

“The men discussed the ongoing efforts to deal with the challenges of Covid-19, including the African Vaccine Acquisition Fund set up by the African Union in response to the pandemic-imposed vaccine emergency,” the AfDB said. Among other things, the AfDB is supporting the AU-affiliated African Centers for Disease Control and Prevention in the fight against COVID-19.

The chance meeting also gave Adesina and Mahamat time to discuss a joint report on regional integration that AfDB, the African Union and the UN Economic Commission for Africa are working on.

Additionally, the AfDB and AU are working together on technical reports that explore the continent’s security issues, as well as water, energy, and other sustainability challenges that climate change presents.

With his arrival in Senegal on Wednesday, Adesina kicked off a three-day official visit at the invitation of President Macky Sall.