Home>News>Madagascar braces for intense cyclone Batsirai
By AT editor - 4 February 2022 at 4:41 pm 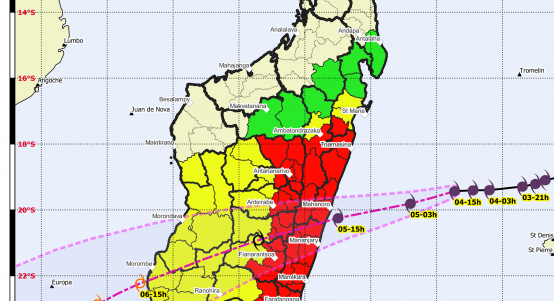 For the second time in as many weeks, people in Madagascar are bracing for a tropical storm that’s set to make landfall on Saturday. That landfall is expected between 11 a.m. and 5 p.m. along the coast between Mahanoro and Mananjar.

The 3 p.m. bulletin issued by Météo Madagascar said Intense Tropical Cyclone Batsirai was located about 400 kilometers from Vatomandry, a coastal town to the east-southeast of the capital city of Antananarivo. Wind speeds were measured at 185 kilometers per hour with gusts to 260 km/h.

“Significant and widespread damage is therefore to be feared if the level of preparation is poor,” the agency said. “Batsirai will then cross the country from East to West to come out at sea in the Mozambique Channel at Menabe on the morning of February 6.”

Widespread flooding and a storm surge of up to 2 meters also are expected.

Much of the eastern coast of the Indian Ocean island nation was placed under a Red Alert warning for imminent danger. A Yellow Alert covered regions to the west and immediate north of the storm’s path. The storm Batsirai was moving west at 11 km/h at the time of the update.

Batsirai has caused damage in Mauritius and in the French territory of La Réunion before heading toward Madagascar. At least 12 people were injured because of the storm in La Réunion.