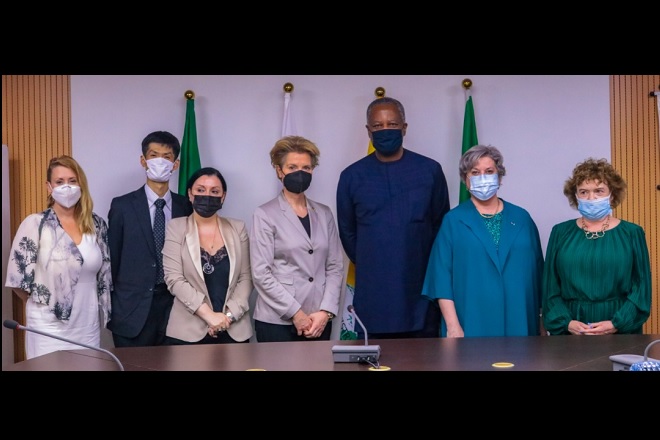 Nigeria has thus far avoided much of the international discourse on Russia and Ukraine, but the country’s foreign minister is engaging in diplomatic efforts at home and has called for an end to the fighting.

“We support every effort being made to stop the aggression and Russian troops to return to Russia,” said Geoffrey Onyeama, speaking to local journalists. He urged a return to negotiations, diplomacy and peace.

Onyeama on Friday met with a delegation representing the G7 nations, led by the ambassadors of Germany and the EU, to discuss the crisis in Ukraine. The Nigerian foreign minister also has met separately with Alexey Shebarshin, the Russian ambassador to Nigeria, and Kirdoda Valerii, the Ukrainian ambassador.

Onyeama’s remarks came as the Kremlin continued its military campaign against Ukraine, with overnight bombings and fighting in Kyiv. While the United Nations, European Union and wider global community have widely condemned President Vladimir Putin’s decision to invade Ukraine, most African nations—apart from clear messages from South Africa and at the UN Security Council—have thus far remained comparatively circumspect on the conflict.

The African Union called for a ceasefire on Thursday, in a statement issued by AU Commission Chairman Moussa Faki Mahamat and current AU President Macky Sall of Senegal. The AU expressed “extreme concern at the very serious and dangerous situation created in Ukraine,” they said.

The AU urged both Russia and Ukraine to negotiate through the UN framework in a starkly worded plea to “preserve the world from the consequences of planetary conflict.”