Home>Politics & Policy>African nations abstain, but Eritrea casts only UN vote against Russia-Ukraine resolution
By AT editor - 2 March 2022 at 9:26 pm 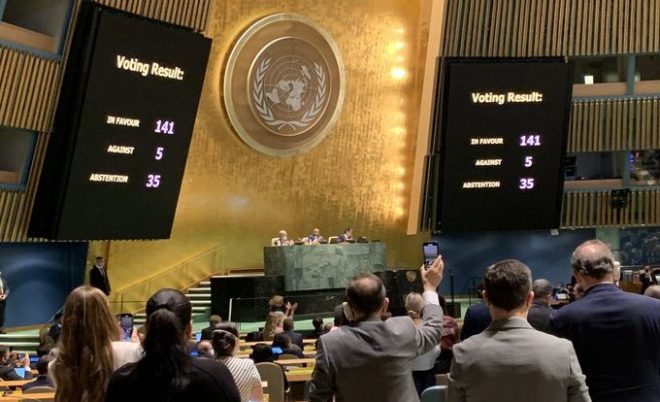 Eritrea was one of just five states, including Russia, to vote against a United Nations resolution on Wednesday that called on the Kremlin to “immediately, completely and unconditionally withdraw all of its military forces from the territory of Ukraine within its internationally recognized borders.”

The others voting against the resolution included North Korea, Syria and Belarus.

Although the resolution passed by a wide margin, with 141 nations voting in its favor, there were 35 states that abstained during the emergency session of the UN General Assembly. Among them were a number of African nations, many of whom have kept a diplomatic low profile as the Russia-Ukraine crisis intensifies.

Algeria and the Central African Republic were among those to abstain during the UN vote, as were Mali, Namibia, Sudan and South Africa.

African nations that voted in favor of the resolution included Benin, Djibouti and Egypt, Nigeria, Zambia and Ghana.

The resolution affirms the sovereignty, independence and territorial integrity of Ukraine, with UN member states expressing their concern over civilians being targeted in Ukraine.

Guterres called on the world to act quickly, adding that the situation in Ukraine threatens to get much worse and that “the ticking clock is a time bomb.”