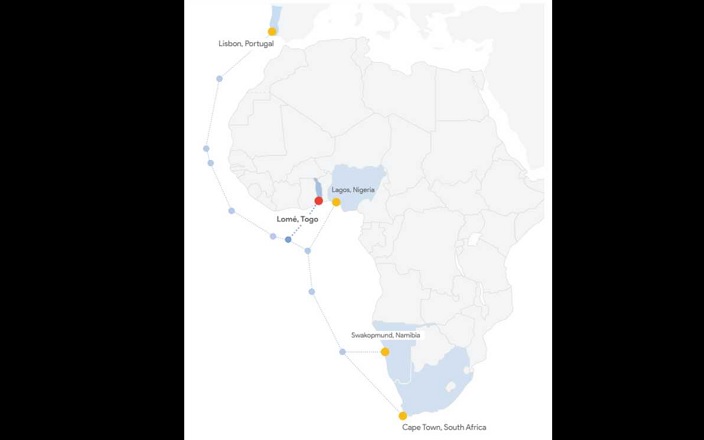 Google’s Equiano undersea cable project is about to make its landing in Togo, bringing some 37,000 new jobs with it by 2025, according to a statement released by the West African nation on Friday.

“As its first landing in Africa, the subsea cable will have a direct impact on internet connectivity in Togo, resulting in high-speed improved and affordable internet access for millions of Togolese and West Africans in the region,” said the government.

Togo’s landing station for the project, and its operation, is the result of a joint venture between Google, CSquared, and Togo’s public telecom entity Société d’Infrastructures Numériques (SIN). Togo holds a 44% minority stake in the venture, called CSquared Woezon.

Google launched and funded the Equiano undersea cable project in 2019. The new cable will start in Western Europe and run along the western coast of the continent to connect Portugal with South Africa. It is named for Olaudah Equiano, a Nigerian-born writer who was a slave taken to the Caribbean in his youth and became an influential anti-slavery leader before his death in 1797.

Togo says once Equiano is switched on, it will offer 20 times more bandwidth than any other cable currently serving West Africa. It’s expected to add US$351 million in economic productivity, while supporting entrepreneurship and investment.

Other nations, including Namibia and Nigeria, also are getting connected to the cable as it continues on to Cape Town. For example, African telecom Paratus completed work on the Namibian station in February, and it’s expected to be ready for service by the end of this year.

Lanre Kolade, Group CEO for CSquared, said the connectivity promises to move Togo forward in its role as a digital hub serving Ghana, Benin and Burkina Faso as well.

Togo’s digital strategy plan is “focused on social inclusion and economic development that will transform the economy with accessible, safe and affordable broadband, across gender, and geography,” said Kolade. “Our joint venture with SIN will put in place the next generation of connected infrastructure on which the digital ecosystem, the economy and the government can ride.”