Home>News>Buhari: Abuja Kaduna Rail hostages are being held as human shields
By AT editor - 3 May 2022 at 3:59 pm 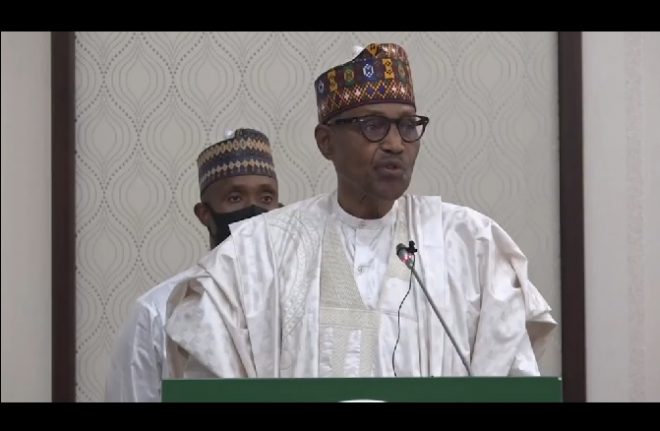 The Nigerian government says it is working toward the safe release of passengers taken captive on the railway line between Abuja, the nation’s capital, and the northern city of Kaduna.

The hostages have been held since a March 28 attack on a train running on the line, which is operated by Nigerian Railway Corporation. Recently released images appeared to show people who remained alive after the deadly attack. The actual numbers remain unclear, but it’s believed there are 62 hostages.

During his speech marking the end of Ramadan, President Muhammadu Buhari assured the nation that security forces were working toward the hostages’ release but that the armed group holding them was using the rail passengers as human shields.

“We’re fully conscious that many families are in a state of anxiety on account of the many captives held by terrorists against their will, including those taken away after the tragic Abuja Kaduna Rail bombing,” Buhari said.

“Rescuing the abducted victims is a delicate situation that requires wisdom, caution and also patience. Any rescue operation that results in the death of any hostage cannot be deemed a success. The government doesn’t want this kind of tragic outcome.”

Buhari’s tenure has been marked by ongoing extremist attacks on civilians since he took office in 2015, with the Boko Haram and Islamic State in West Africa Province (ISWAP) groups primarily claiming responsibility. He is a frequent target of criticism from Nigerians demanding that he do more to ensure state security.