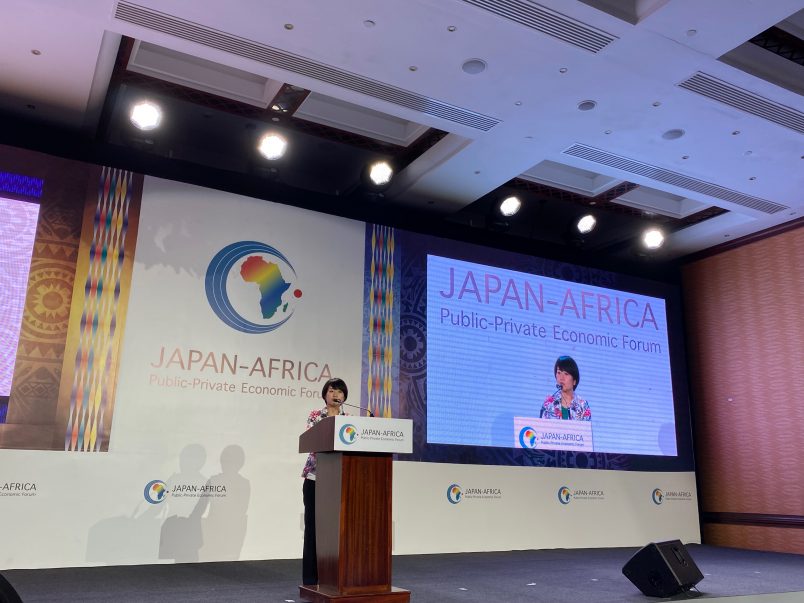 Japan is looking to expand its presence on the African continent, with trade and investment taking center stage during the Japan-Africa Public-Private Economic Forum held in Nairobi.

The event attracted seven ministerial-level leaders and over 200 participants from 15 countries, according to the Kenyan trade ministry. Among them was Takako Suzuki, a Japanese state minister of foreign affairs who attended the event while on an African tour that also took her to Rwanda.

Suzuki’s presentation, above, offered a look at what to expect in August when Tunisia hosts the Eighth Tokyo International Conference on African Development (TICAD). Suzuki said Japan is looking to invest in startup firms and seeks to boost climate-friendly, sustainable business development in Africa.

Other conference priorities included the opportunities presented by the Africa Continental Free Trade Area (AfCFTA), and ways to improve the business climate in order to attract more investment.

Betty Maina, Kenya’s trade minister, said Japan and the African continent have a fairly balanced trade pattern. In 2020, Africa’s exports to Japan stood at US$8.6 billion, while African imports from Japan were about $7.9 billion.

One nation that’s already benefited from Japanese investment is Morocco, where automotive industry manufacturers have been investing millions and setting up shop to build auto wiring and parts facilities. Yazaki and Sumitomo are among the Japanese companies expanding their presence there.

South Africa has previously hosted the Japan-Africa forum, which was established during TICAD in 2016.

Image: Embassy of Japan in Kenya