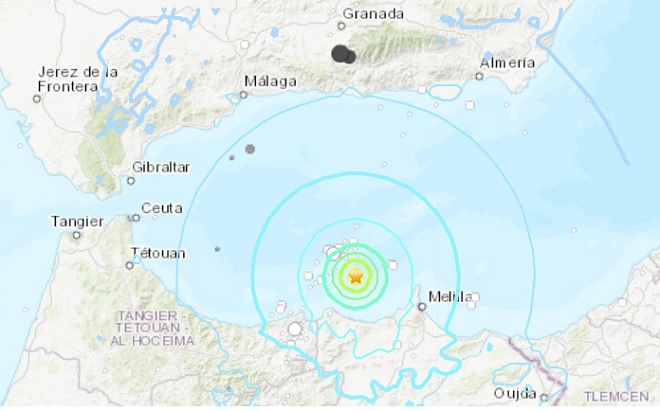 An earthquake that struck just off the coast of Morocco beneath the Mediterranean Sea was widely felt across the region, according to international geological agencies.

The United States Geological Survey (USGS) said the magnitude-5.5 quake occurred at 1:35 p.m. and was centered 48 kilometers from Al-Hoceïma, a coastal city in the Rif region. Both Moroccans and people living across the sea in Spain said they felt the shaking.

“It was more pronounced than previous tremors,” said a resident of Nador, the regional capital located about halfway between Al-Hoceïma and the Algerian border. The report was one of many captured by the European-Mediterranean Seismological Centre.

Indeed, the National Institute of Geophysics, based in Rabat, said the earthquake was among the strongest to hit the region since 2016.

“The tremor was terrifying,” said another Nador resident. “I could feel the bed swaying and the walls moving, and a sound in the outside air as if it was a distant roar in the sky.”

Others said the furniture moved and they felt strong quaking, though there were no immediate reports of damage.

From Vélez-Málaga in coastal Spain, one witness said it was the “worst movement we have experienced.” A resident of Torremolinos, west of Magala, said they thought their muscles were twitching until the dog reacted too.

Al Hoceima is one of the most seismically active regions in Morocco, and remains vulnerable to earthquake damage due to local building standards and the number of old buildings.