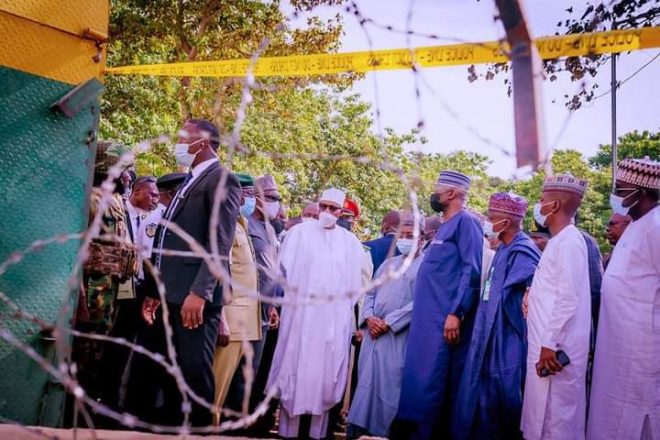 Nigerian President Muhammadu Buhari on Wednesday toured the Kuje prison in Abuja, following a terrorist attack on the facility that led to the escape of roughly 800 people, more than half still unaccounted for.

Buhari visited alongside interior minister Shuaib Mohammad Lamido Belgore and Haliru Nababa, the head of the country’s corrections system. He first saw the bombing damage to the prison, which allowed access to the facility, as well as damage to the prison records office, which was set on fire.

The attack focused on all cells in which Boko Haram members were housed, according to a Nigerian government press release. All 63 of the Boko Haram members escaped, along with hundreds of others. Authorities were able to recapture 350 of the inmates.

At least one prison security officer died in the attack.

“I am disappointed with the intelligence system,” Buhari said. “How can terrorists organize, have weapons, attack a security installation and get away with it? I am expecting a comprehensive report on this shocking incident.”

Buhari asked how many armed guards were on duty, and questioned how both the watchtowers and CCTV systems were used during the prison break.

Nigerians expressed anger at this latest security failure, which left many in Abuja living on edge because of the threat of so many escapees in the city. Others demanded action be taken against officials responsible for the security failure, and questioned Buhari’s imminent trip to Senegal in the aftermath of the attack.

Buhari’s own security team was attacked earlier in Katsina state, according to presidency spokesman Garba Shehu. Two people suffered minor injuries while repelling the attack, while the rest of an advance team made it to their destination ahead of Buhari’s planned visit there.