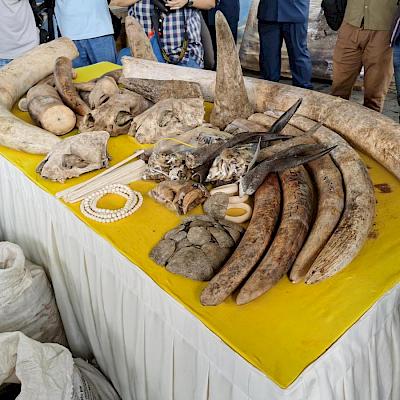 Malaysian authorities say they’ve made the largest seizure of elephant ivory and other illegally trafficked wildlife parts in the nation’s history.

Authorities told the British-based nonprofit TRAFFIC, an anti-trafficking agency attending the press conference, that the shipment was under surveillance after leaving Abu Dhabi in the United Arab Emirates. It originated in an as-yet unnamed African nation and was destined for Pasir Gudang when it was seized on July 10. From there, it was likely destined for Chinese markets.

JKDM said that within the three containers were 6,000 kilograms (kg) of elephant ivory, 29 kg of rhino horn, around 100kg of pangolin scales and more than 300 kg of other wildlife parts.

“This medley of threatened species in a single consignment is concerning. It certainly verifies the suspicion that criminals continue to use Malaysian ports to move contraband wildlife,” said Kanitha Krishnasamy, the Southeast Asian director for TRAFFIC.

Krishnasamy congratulated Malaysian authorities but said the seizure also makes clear there is more work to be done.

“This case also goes to show that criminals are bold enough to think they can get away with repeated attempts,” she said. “Malaysia needs to prove them wrong.”

No arrests have been made in the case, which remains under investigation.