Home>Politics & Policy>Macron wraps up three-nation African tour in Guinea-Bissau
By AT editor - 28 July 2022 at 9:59 pm 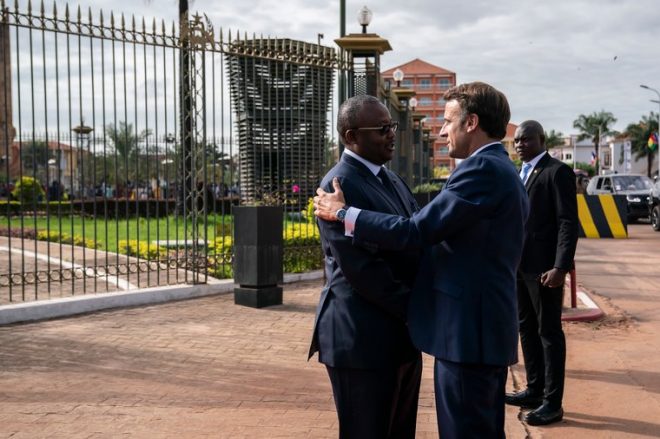 President Emmanuel Macron of France wrapped up a three-nation tour of West Africa with a visit to Guinea-Bissau on Thursday, meeting with President Úmaro Sissoco Embaló to discuss regional security issues.

His meeting with Embaló, who took over this month as commissioner of the Economic Community of West African States (ECOWAS), focused on the increasing threat to Gulf of Guinea nations as armed group activity in the Sahel continues to spread.

“My visit to Guinea-Bissau was only a stopover,” said Macron. “We still have a lot to do together for the economy and agriculture, for education and sport, for our collective security and much more.”

Macron’s visit also included stops in Benin and Cameroon. During his press conference in Cotonou, he focused on the food crisis facing West African nations because of the Russia-Ukraine conflict.

“Russia has started a new kind of hybrid world war,” Macron said. “It decided that information, energy and food were military instruments put at the service of a continental imperialist war against Ukraine.”

While in Benin, Macron reiterated France’s commitment to return art treasures to their rightful owners and visited an art exhibit at the Palais de la Marina with President Patrice Talon. Macron also toured the tech innovation hub of Sèmè City.

With President Paul Biya in Cameroon, Macron focused on France’s support for the FARM initiative, launched in June by the European Union, the African Union, and the G7 nations.

Alongside the World Trade Organization (WTO), the World Food Program (WFP), and the International Fund for Agricultural Development (IFAD), the FARM agreements seek to limit the global food security threats presented by the loss of Ukrainian resources because of the conflict with Russia.