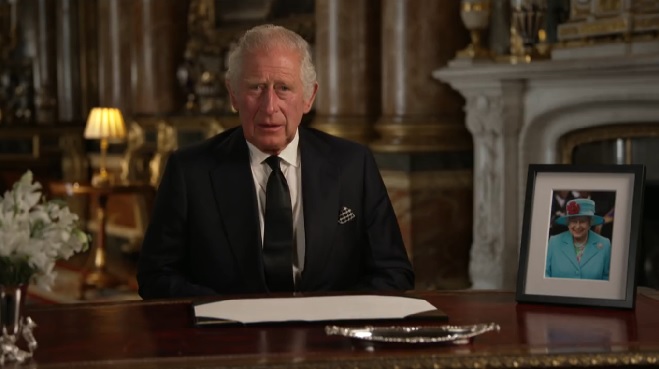 In his first address to the nation since Queen Elizabeth’s death, King Charles III paid tribute to his mother’s 70 years of service and promised to continue her commitment in his new role.

“As the queen herself did with such unswerving devotion, I too now solemnly pledge myself, throughout the remaining time God grants me, to uphold the constitutional principles at the heart of our nation,” Charles said in a televised broadcast.

“And wherever you may live in the United Kingdom, or in the realms and territories across the world, and whatever may be your background or beliefs, I shall endeavor to serve you with loyalty, respect and love, as I have throughout my life.”

The British king noted that his mother, speaking from Cape Town in 1947 on her 21st birthday, pledged to “devote her life, whether it be short or long, to the service of her peoples. That was more than a promise: it was a profound personal commitment which defined her whole life.”

Queen Elizabeth II was the longest reigning British monarch, having served 70 years before her death Tuesday at age 96. Many African leaders have sent their condolences to the United Kingdom, despite the difficult legacy of colonialism across the African continent and criticism of the royal family’s leadership in the decades of that era.

“I met Her Majesty Queen Elizabeth II at the last Commonwealth meeting, which was held in London in 2018, where we spent some time looking at letters that former President Nelson Mandela sent to the queen, and we reminisced about the great statesman that Her Majesty so respected,” said South African President Cyril Ramaphosa.

“Her Majesty was an extraordinary and world-renowned public figure who lived a remarkable life. Her life and legacy will be fondly remembered by many around the world,” he said, adding his condolences to King Charles III and the British people.