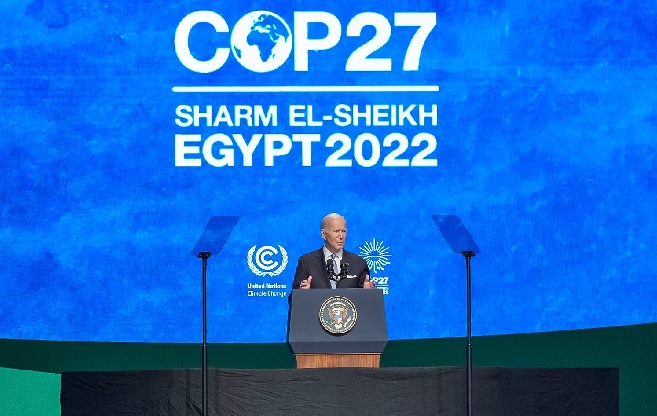 President Joe Biden of the United States announced a new US$100 million commitment to the climate Adaptation Fund and an additional $150 million in new support for  the President’s Emergency Plan for Adaptation and Resilience (PREPARE) efforts across Africa.

The announcement, made during Biden’s speech to COP27 in Sharm el-Sheikh, Egypt, doubles the previous commitment to the Adaptation Fund and comes as African nations pressure wealthy nations for additional help in fighting climate change impacts.

The U.S. also announced a new renewable energy initiative with Egypt, and renewed efforts to cut methane emissions in the U.S.

“Methane is 80 times more potent than carbon, and it accounts for nearly half — half of the net warming we’re experiencing now,” Biden said. “So cutting methane by at least 30 percent by 2030 can be our best chance to keep within reach of 1.5 degrees Celsius target.”

The new initiatives include advances in early warning systems for the African continent, as well as $3.5 million in support for least developed countries— Uganda, Malawi, Gambia, and Burkina Faso among them—to support adaptation and resilience efforts.

“The science is devastatingly clear,” Biden said. “We have to make vital progress by the end of this decade.  And that’s why the United States is rallying the world around climate game-changers.”